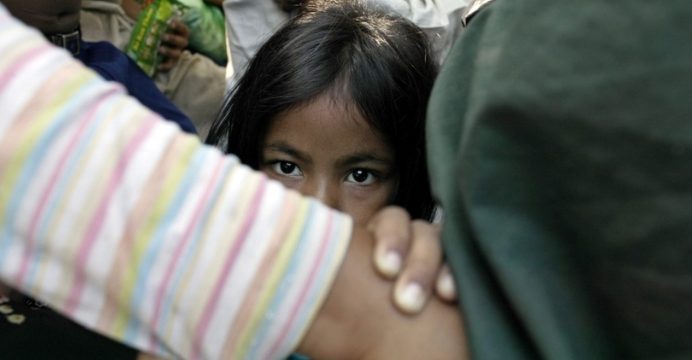 During the Forum, IOM’s Assistance to Vulnerable Migrants Unit hosted a breakout session to discuss trafficking in emergency settings.
Moderated by Rick Sandoval – a veteran immigration journalist and director of 100 Reporters Agency – the panel offered an exchange of ideas and an opportunity to compare best practices in responding to trafficking and exploitation during emergency crises.

Human trafficking and exploitation often are direct consequences of crises and not mere byproducts, explained Michela Macchiavello, IOM Specialist, Assistance to Vulnerable Migrants Unit, who cited an IOM study published in 2015. Macchiavello stressed that both human trafficking and exploitation can be “a matter of life and livelihood for victims. For this reason, they need to be given from the outset as much priority as any other crisis response.”

Following the recommendations of this study, IOM is now developing a Global Strategy to fight trafficking and exploitation in crisis. This will allow actors to address such crimes systematically and strengthen IOM’s capacity as well as the ability of first responders, from both the humanitarian and development communities, to respond to these violations in the future.

Too often, victims might not be visible at the beginning of the crisis. One reason for this: the destruction of traditional protection mechanisms that hold sway before a crisis. Therefore, it is vital to start addressing the issue even when victims are not yet visible.

“Victims will surface possibly a few weeks or months into the crisis but by then it may be too late to help them! Larger numbers of victims will have been affected by trafficking, some beyond recovery, and the crime will have expanded much more than if we had acted at the very outset of the crisis,” explained Macchiavello.

Authorities also have key roles to play in mitigating trafficking during crises. “We encourage governments to build the necessary foundations to combat trafficking and to raise awareness of human trafficking indicators among first responders before a crisis hits,” said Greg Hermsmeyer, Senior Coordinator for International Programs, US Department of State, Office to Monitor and Combat Trafficking in Persons.