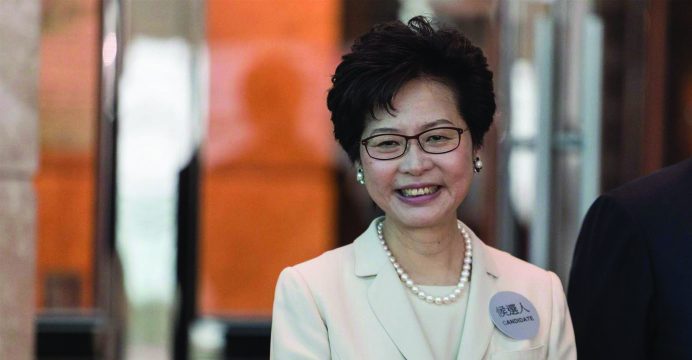 Carrie Lam’s swearing-in as Hong Kong’s new leader on Saturday marks the culmination of the lifelong civil servant’s career as she inherits a divided city fearful of China’s encroaching influence.

Lam, 59, was widely seen as Beijing’s preferred candidate when she was elected in March by a mainly pro-China committee representing special interest groups, from real estate and agriculture to teaching and medicine, as well as lawmakers.

But critics have said she will only further polarise a society driven by mass protests two years ago against Beijing’s interference in the affairs of the semi-autonomous city and still divided between those loyal to China and those concerned about its growing influence.

Before landing the top job, Lam served as deputy to her highly unpopular predecessor Leung Chun-ying, slammed as a puppet of Beijing.

Appointed by Leung as chief secretary in 2012, the new leader promoted a Beijing-backed political reform package rejected as “fake democracy” by opponents.

Bespectacled Lam — whose Cantonese name is Lam Cheng Yuet-ngor is nicknamed “lai-ma” or “wet-nurse” by opponents in a jibe over what they say was fawning loyalty towards her former boss.

A mother of two adult sons, Lam is known as a tough and effective enforcer.

In 2007, she personally faced off with protesters over the demolition of a historic pier built during Hong Kong’s colonial days under British rule. The landmark was ultimately destroyed.

At the height of the mass street protests in 2014 known as the “Umbrella Movement” she met with student representatives in a televised meeting about the political reform dispute.

Lam was an activist herself during university in the 1970s, with one photo published in the South China Morning Post showing her marching in protest against the expulsion of four “leftist” students.