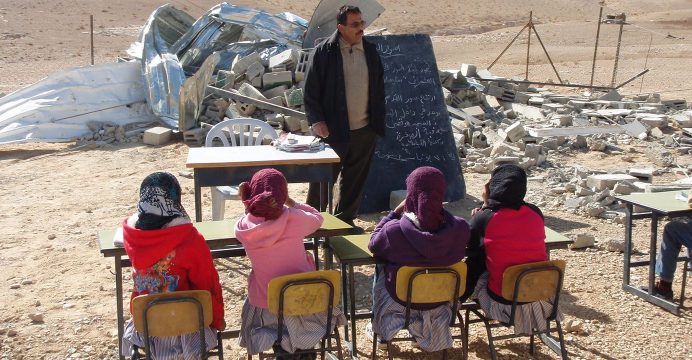 Young Palestinian Faris Abu-Mayyaleh will soon find out how he did in his final high school exams, in which he answered questions about Israel’s founding fathers and the history of Zionism.

Faris, 18, chose to study the Israeli curriculum instead of the Palestinian equivalent in the hope that it will open more doors at colleges in Israel and help him get work there.

“I know it’s the ‘Occupation’. But Palestine, Israel — I don’t care. I just want to go to university,” said Abu-Mayyaleh, who lives and studies in East Jerusalem, annexed by Israel after the 1967 Middle East war, reports Reuters.

Israel hopes many other Palestinians will share his attitude after offering additional funding to Palestinian schools in East Jerusalem if they agree to teach the Israeli curriculum.

The aim, it says, is to help young Palestinians gain the qualifications they need to find work in Israel more easily. It also offers Israel a chance to steer some Palestinians away from a curriculum it says is rife with anti-Semitism and incitement.

It is a loaded issue for principals, parents and pupils. Many Palestinian schools badly need funding, but embracing the Israeli education program — including subjects such as Israeli civics and history — is seen by many Palestinians as tantamount to adopting the historical narrative of the enemy.

Only 10 of the city’s public Palestinian schools have so far agreed to the change on offer since last year, and only about 5,000 of the 110,00 Palestinian pupils of East Jerusalem’s 185 public and private establishments study the Israeli program.

“It’s not easy,” said a Palestinian member of staff who teaches Israeli civics at a Palestinian school. “The children want to learn about their own people. I teach a lot of things I don’t believe in, but I have no choice.”

Not every school uses the same textbooks but the Palestinian and Israeli programs differ widely on some historical events.

Under the Israeli curriculum, pupils are taught that the Arab-Israeli war of 1948, the year Israel was created, was a battle for independence for a state that would be a haven for Jews after centuries of persecution.

The Palestinian curriculum teaches it as the Nakba, or Catastrophe, when hundreds of thousands of Palestinians fled or were driven from their homes during the fighting.

Staff at the East Jerusalem schools who spoke to Reuters asked not to be identified because they did not have permission to be interviewed and feared for their jobs.

The head of one East Jerusalem school who rejected the Israeli curriculum said authorities had offered to triple the annual budget for each pupil, from about 500 shekels ($144)to 1,500.

Another Palestinian headmaster said: “They offered me more money, but I said no. The parents here don’t want it. It’s not our story, we want to teach the Palestinian story.”

Israeli Education Minister Naftali Bennett, head of the religious-nationalist Jewish Home party, said the program was meant to close gaps in education, poverty and unemployment that have afflicted Jerusalem’s 320,000 Palestinians for decades.

“A young man from East Jerusalem who has an Israeli diploma has a much higher chance of getting a job. Our aim is to spur economic progress — that’s why we’re using a carrot, not a stick,” Bennett told Reuters.

The Education Ministry did not provide full details of the extra budget and incentives these schools have received, beyond funding for extra teachers and teaching hours.

Asked whether funding could be tripled per pupil at schools that adopted the Israeli curriculum, an Education Ministry source said it was “certainly possible” but the offers of extra funding varied from school to school.

The Association for Civil Rights in Israel (ACRI) and other rights groups say the program is discriminatory. They say Palestinian schools in East Jerusalem are underfunded and the Israeli authorities should fund all the city’s schools equally.

“Israeli authorities have for years neglected the education system in East Jerusalem,” said Nisreen Alyan, head of the Jerusalem Program at ACRI. “While it is the first time the government and municipality see a need to close the gaps in East Jerusalem, the program is designed according to a political agenda.”

“I’m not forcing anything on anyone. I’m saying ‘make it available’,” he said. “I believe market forces will do the job. Ultimately, parents will tell their children: ‘I want you to get the Israeli diploma so you get a job in programing, not cleaning’.”