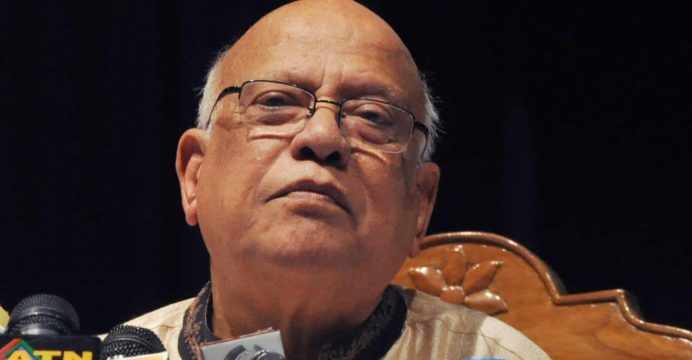 The budget, according to BSS, is aimed “to accelerate the pace of development and achieve a higher growth for transforming Bangladesh into a developed nation by 2041”.

Bangladesh is now on the wheels of achieving the middle-income status by 2021 as enshrined in the Vision-2021 of the present government of prime minister Sheikh Hasina, said the state-run news agency.

On 1 June, finance minister AMA Muhith rolled out a Taka 4,00,266 crore national budget for fiscal 2017-18, setting the GDP growth target at 7.4 percent and outlining a set of plans-strategies to build a prosperous, happy and peaceful country by 2041.

According to the budget documents for FY18, Taka 2,41,253 crore has been allocated for non-development expenditure, including other expenses and Taka 1,53,331 crore has been earmarked for Annual Development Programme (ADP). The overall revenue collection target for the next fiscal has seen set at Taka 287,990 crore of which Taka 248,190 crore will come from the NBR sources.

The Jatiya Sangsad on Thursday passed the Appropriation Bill 2017 unanimously. Concerned ministers placed 60 demands for grants while the main opposition party and independent lawmakers brought 352 cut motions to clear the legal basis. However, the demands for grants were approved by the House by voice votes.

The finance minister moved the appropriation bill seeking budgetary allocations for meeting development and non-development expenditures of various ministries and the government.

The JS passed the Finance Bill 2017 on Wednesday in an amended form with some changes to the tax-duty and Value Added Tax (VAT) proposals. With the adoption of the Finance Bill-2017 and the Appropriation Bill-2017 today, the process of the JS passing the national budget for FY 2017-2018 has been completed.

The opposition and independent lawmakers proposed a total 352 cut motions, but they only spoke on the motions for six demands for grants, which were rejected by voice votes.

Ministers in charge of the concerned ministries placed their proposals for expenditures through 60 demands for grants, which were passed by voice votes.