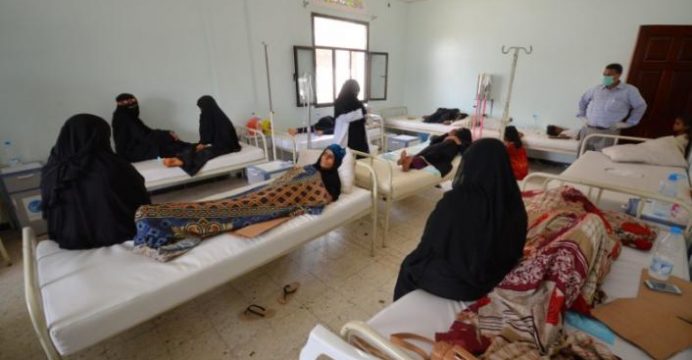 Cholera outbreak in Yemen may have reached the halfway mark at 218,798 cases

A major cholera outbreak in Yemen may have reached the halfway mark at 218,798 cases as a massive emergency response has begun to curb its spread two months into the epidemic, the World Health Organization (WHO) said on Tuesday.

Two years into a devastating civil war between a Saudi-led coalition and Iran-aligned Houthi rebels, Yemen became a perfect breeding ground for the disease, which spreads by feces getting into food or water and thrives in places with poor sanitation, reports Reuters.

Soon after the outbreak began, the WHO saw a risk that it could affect 300,000 people within six months. But it spread at double that speed, prompting a far-reaching emergency response that may have turned the corner.

“We have never seen something so explosive in Yemen,” Ahmed Zouiten, WHO’s senior emergency Adviser for Yemen, told reporters.

“We are really scaling up very aggressively our response and we hope that those results will start to show very rapidly.”

Although most of Yemen’s health infrastructure has broken down and health workers have not been paid for more than six months, the WHO is paying “incentives” to doctors, nurses, cleaners and paramedics to staff an emergency cholera network.

With funding help from the World Bank, the WHO is setting up treatment centers with 50-60 beds each, overseen by shifts of about 14 staff working around the clock. The aim is to reach 5,000 beds in total.

But the bigger impact is being made by oral rehydration points with about 10 staff, whose job is to catch cholera cases before they become severe and need hospitalization. The WHO wants to have 2,800 such sites – 10 for every treatment center.

“They are as close as possible to the people’s dwellings, and we are able to get people who have just started to get diarrhea,” Zouiten said.

The results are visible in the fatality rate, which shows almost all governorates reporting daily deaths in single figures, or even zero. “The case fatality rate that is going down is a real thing,” he said.

A map of the outbreak shows that the worst hit areas are largely controlled by the Houthi rebels. The worst cholera black spots are Amanat al-Asimah, around the capital Sanaa, the port region of Hodeidah, and Hajjah governorate.

Case numbers in the first two have fallen sharply in the past week, and although Hajjah repeatedly topped 1,000 new daily cases, Zouiten said many were old cases being newly counted.

Despite the war, trucks taking vast amounts of supplies to fight the epidemic have not encountered great difficulties in reaching areas in need. “So far, whenever we needed road permits, we’ve got (them), from both sides,” Zouiten said.

Normally an epidemic would be expected to recede as fast as it grew, but the WHO hopes that its aggressive response will stop the outbreak even faster than it erupted, helped by growing awareness in the community and the natural immunity of the many thousands of people who got sick and survived.