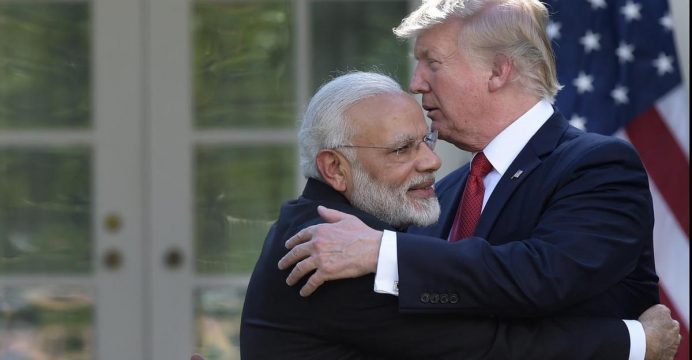 U.S. President Donald Trump urged Indian Prime Minister Narendra Modi to do more to relax Indian trade barriers on Monday during talks in which both leaders took great pains to stress the importance of a strong U.S.-Indian relationship.

At a closely watched first meeting between the two, Trump and Modi appeared to get along well. Modi pulled in Trump for a bear hug on the stage as the cameras rolled in the Rose Garden, reports Reuters.

“I deeply appreciate your strong commitment to the enhancement of our bilateral relations,” Modi told him. “I am sure that under your leadership a mutually beneficial strategic partnership will gain new strength, new positivity, and will reach new heights.”

Trump was also warm but made clear he sees a need for more balance in the U.S.-India trade relationship in keeping with his campaign promise to expand American exports and create more jobs at home. Last year the U.S. trade deficit with India neared $31 billion.

Trump said he would like a trading relationship that is “fair and reciprocal.”

“It is important that barriers be removed to the export of U.S. goods into your markets and that we reduce our trade deficit with your country,” he said.

Trump said he was pleased about an Indian airline’s recent order of 100 new American planes and that the United States looked forward to exporting more energy, including major long-term contracts to purchase American natural gas.

These energy contracts “are being negotiated and we will sign – trying to get the price up a little bit,” Trump said.

Modi came to Washington looking to revitalize a relationship that thrived under former President Barack Obama but has appeared to flag as Trump courted India’s rival China in an effort to persuade Beijing to do more to rein in North Korea.

Modi effusively praised Trump, hailing his “vast and successful experience in the business world” and “great leadership” for U.S.-India ties, which he said should “lend an aggressive and forward looking agenda to our relations.”