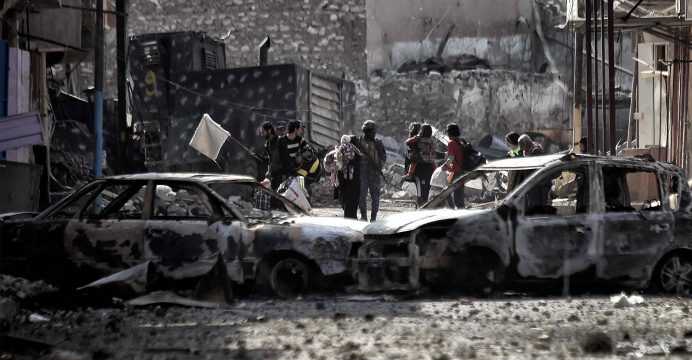 Iraqi forces battled deep into the devastated historical heart of Mosul and closed in fast on the last pockets of jihadists Sunday, eight months into an epic battle to retake the city.

Three years after overrunning Mosul and making it the de facto Iraqi capital of the “caliphate” they proclaimed, the jihadists only controlled about a square kilometre in the city, commanders said.

Lieutenant Colonel Salam al-Obeidi was speaking to AFP inside the devastated Old City, about 50 metres (yards) from what is left of the Hadba leaning minaret the jihadists blew up four days earlier.

“Sixty-five to 70 percent of the Old City has been liberated, there is less than a square kilometre left to retake,” said Obeidi, from the elite Counter-Terrorism Service (CTS) that has spearheaded the assault, he said.

The jihadists simultaneously blew up the nearby Nuri mosque, where Abu Bakr al-Baghdadi gave his first sermon as IS leader in July 2014, his last public appearance to date.