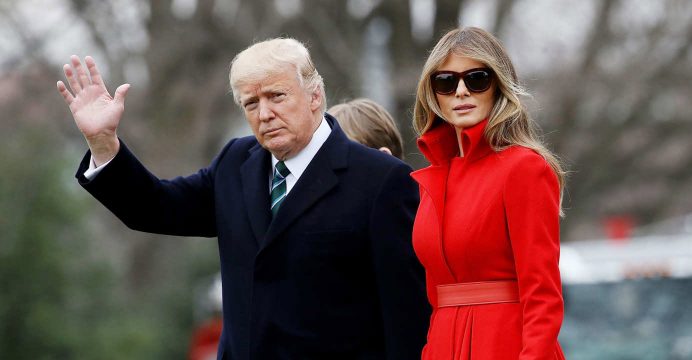 The wedding, held in a historic auditorium near the National Mall, had been a closely held secret until a friend of the couple, US Commerce Secretary Wilbur Ross, let word slip earlier this week.

Trump, sporting a black tie tuxedo, and Melania, who donned a pink blush dress her spokeswoman said was Gilles Mendel silk chiffon, drove past crowds of bystanders hoping to snap a photo of the first couple as they journeyed a few blocks south for the glamorous affair.

About 300 guests were due to attend, including Vice President Mike Pence and other members of the Trump administration. Canadian Finance Minister Bill Morneau was believed to be among the guests.

Linton, 36, holds journalism and law degrees. She has appeared on American television shows including “CSI: NY” and “Cold Case,” and had small roles in several movies, according to her website.

She also works as a film producer.

A book Linton wrote about spending her gap year in Zambia, “In Congo’s Shadow,” drew criticism for inaccuracies and for a tone that a Washington Post critic described pointedly as “the perfect White-Savior-in-Africa story.”

She later apologized and agreed to give any profits to charity.

Linton met Mnuchin at a wedding reception in Los Angeles in 2013, and he proposed two years later, she told The New York Times.

He had named Linton last month as interim head of Dune Entertainment, a company he helped found, but she resigned after Democrats raised questions about possible ethical conflicts.

Mnuchin has been a key player in Trump administration efforts to craft and pass tax reforms, and in urging Congress to raise the national debt ceiling.

This will be Mnuchin’s third marriage and Linton’s second.