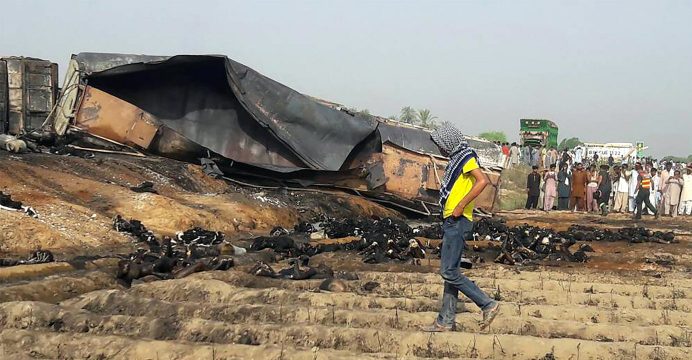 An overturned oil tanker exploded in a huge fireball in Pakistan Sunday, killing at least 139 people and injuring scores as crowds scavenging for fuel ignored warnings to stay clear, officials and witnesses said.

The horrific early morning tragedy came hours before Pakistan was due to begin Eid al-Fitr celebrations marking the end of the Muslim holy fasting month of Ramadan.

The tanker carrying 40,000 litres of fuel overturned on a main highway while travelling from Karachi to Lahore, near the town of Ahmedpur East in Punjab province.

Details were sketchy but some witnesses suggested the tanker had suffered a burst tyre, said regional police chief Raja Riffat.

“When it turned over the residents of the nearby village of Ramzanpur Joya rushed to the site with buckets and other containers, and a large number of people on motorcycles also came and started collecting the spilling fuel,” Riffat told AFP.

“After about 10 minutes the tanker exploded in a huge fireball and enveloped the people collecting petrol. It was not clear how the fire started.”

Residents could be seen walking past blackened and twisted bodies piled by the roadside. Earlier, television footage showed shooting flames and a thick plume of smoke as firefighters battled to extinguish the blaze.

The charred wreckage of dozens of motorcycles and cars was scattered on the highway, along with kitchen utensils, pots, water coolers, jerrycans and buckets which victims had brought to collect the petrol.

Dozens of villagers and relatives of victims looked on from nearby farmland, many of them weeping.