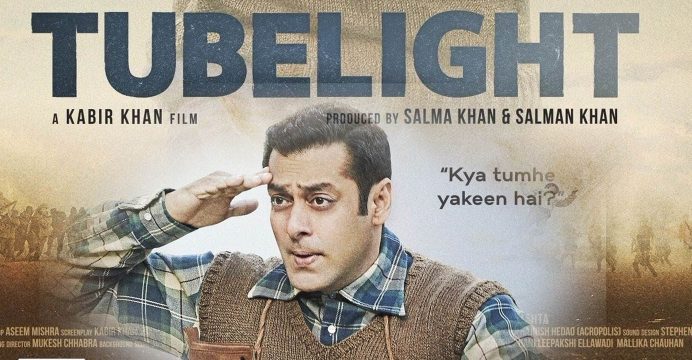 At the outset, one must warn people that Tubelight is a departure from your regular Salman Khan mass entertainer. Here Bollywood’s darling-star plays a child-man who doesn’t take off his shirt or flex his biceps. So the audience going in for this one should invest belief (or should that be disbelief?) in this age of innocence offering from Kabir Khan, whose past outings Ek Tha Tiger and Bajrangi Bhaijaan were more commercially-wired.

First things first, it’s great to see Om Puri one last time. Puri was one of the very finest actors our country ever produced, and Kabir Khan’s Tubelight marks his last filmed performance. Sure, he looks like he’s walked straight off the logo for Kentucky Fried Chicken, and is given trite platitudes to mouth instead of actual dialogue, but it’s still wonderful to watch him chew on watermelon and tell us how faith can move mountains. In fact, say I, we should all be grateful to Khan and Tubelight for illustrating to us just how true it is that dear Mr Puri is, indeed, now in a better place, reports NDTV.

Tubelight inspired by the Hollywood film Little Boy directed by Alejandro Monteverde, is told with a fable-like simplicity. Set in Jagatpur, a pretty North-Indian town, during the Indo-China war, the locals are mostly hangers on, who have little to do except laugh at Laxman’s antics or berate him. Banne Chacha (Om Puri) mentors him, imparting Gandhian gyaan at every given opportunity. Narayan (Mohd Zeeshan) is the local bully who slaps the hero around without provocation, making the slaps sting less and irritate more. Things brighten up a bit when the drop-dead gorgeous Liling (Zhu Zhu) and her perky son Guo (Matin), who are Chinese immigrants, move to Jagatpur. But even this track seems like a ploy to play up the Hindi-Chini bhai bhai sentiment, reports Reuters.

The war sequences are poorly mounted because the filmmaker hasn’t invested in them either through evocative writing or mind-numbing montages.

The film that propagates the values of family, faith and patriotism doesn’t manage to take a complete leap of faith because often the emotions barely scratch the surface. Everything is so cloyingly sweet that you start feeling you’ve strolled into a sermon rather than a Salman movie. Pritam’s Naach Meri Jaan and Sajan Radio are magical, as is Shah Rukh Khan’s cameo as magician, Go-Go Pasha. Aseem Mishra’s camera work is largely-breathtaking.

When it comes to performances–Salman laughs and cries unselfconsciously, showing his audience the less-seen side of his macho screen image. He cannot move mountains with his performance but he tries hard to keep the faith alive. Sohail is sincere. Zhu Zhu shows spunk and young Matin entertains. And, Om Puri reminds you of the mettle unsung heroes are made of.