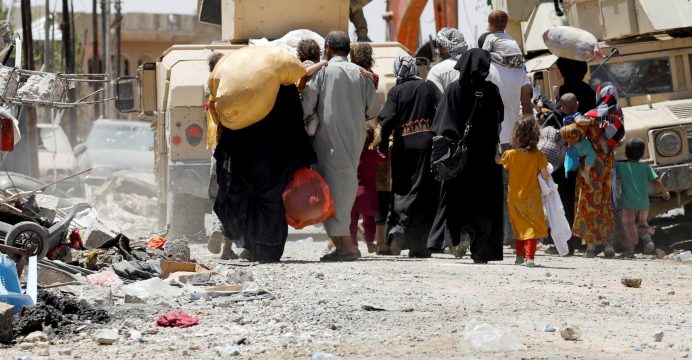 Iraqi forces battled their way along two streets that meet in the heart of Mosul’s Old City on Friday, and said they aimed to open routes for civilians to flee Islamic State’s last stand there.

U.S.-trained urban warfare units are leading the fight in the maze of narrow alleyways of the Old City, the last district in the hands of the Sunni Islamist insurgents.

Iraqi authorities are hoping to declare victory in the northern Iraqi city in the Muslim Eid holiday, which marks the end of the fasting month of Ramadan, during the next few days, reports Reuters.

Its destruction gives the troops more freedom in attack as they no longer have to worry about damaging the ancient site.

It was in the al-Nuri mosque that Islamic State’s leader, Abu Bakr al-Baghdadi, proclaimed its “caliphate” over parts of Iraq and Syria three years ago.

A U.S.-led international coalition is providing air and ground support in the eight-month-old offensive to drive the militants from their de-facto capital in Iraq.

A map published by the Iraqi forces media office showed the elite Counter Terrorism Service pushing along al-Faruq Street, from north to south, and Nineveh Street, from east to west.

The two roads cross in the center of the Old City. When the troops reach this point, they will have isolated the remaining IS fighters in four separate pockets.

“The aim is to open ways for civilians to evacuate, we give them indications by lousdspeaker when it’s possible,” an Iraqi military spokesman told Reuters by phone.

Seven thousand civilians were brought out of the Old City during the day, the Iraqi state news website said.

Reuters journalists in Mosul saw people reaching safety. Some were injured, and some had been carried on army humvees to rear positions where they were given bananas, biscuits, and water.

“The army’s 16th division evacuated us,” said a man who had fled with his wife and 15-day-old baby.

“God bless them,” said another man, who was limping.

Doctors Without Borders (MSF) reported an influx of wounded people to its trauma clinic in the west of the wartorn city on Friday morning.

“This … is yet another example of the horrific suffering and indiscriminate violence suffered by civilians, including women and children,” said Jonathan Henry, MSF Emergency Coordinator for West Mosul, in a statement.

More than 100,000 civilians, of whom half are children, are trapped in the crumbling old houses of Old City, with little food, water or medical treatment.

Aid organizations say Islamic State has stopped many from leaving, using them as human shields. Hundreds of civilians fleeing the Old City have been killed in the past three weeks.