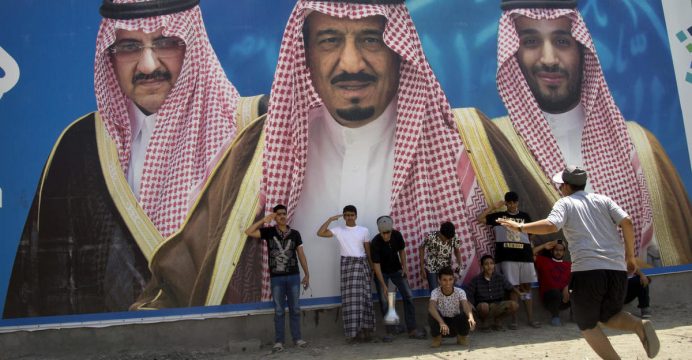 Iran will almost certainly respond to a more aggressive posture by the United States and its chief Sunni Arab ally in battlefields where Riyadh and Tehran are engaged in a regional tussle for influence.

Saudi King Salman made his son Mohammed bin Salman next in line to the throne on Wednesday, handing the 31-year-old sweeping powers, in a succession shake-up, reports Reuters.

Prince Mohammed, widely referred to as “MbS,” has ruled out any dialogue with arch rival Iran and pledged to protect his conservative kingdom from what he called Tehran’s efforts to dominate the Muslim world.

In the first meeting between Trump and MbS at the White House in March, the two leaders noted the importance of “confronting Iran’s destabilizing regional activities.”

But that could have unintended consequences, said some current and former U.S. administration officials.

The greatest danger for the Trump administration, a longtime U.S. government expert on Middle East affairs said, was for the United States to be dragged deeper into the Sunni-Shi’ite conflict playing out across the Middle East, a danger that could be compounded by Trump’s delegation of responsibility for military decisions to the Pentagon.

If the administration gives U.S. commanders greater authority to respond to Iranian air and naval provocations in the Gulf and Strait of Hormuz, things could easily spiral out of control, the official said.

“If we were to witness an incident at sea between an Iranian and a U.S. vessel in the Gulf, at a time of immense distrust and zero communication, how likely is it that the confrontation would be defused rather than exacerbated?” said Rob Malley, vice president for policy at the International Crisis Group.

Eric Pelofsky, who dealt with Middle East issues at the White House under Obama, said the administration had “labored pretty hard to avoid a direct clash between Saudi Arabia and Iran on the high seas,” in part because it would expand the Yemen conflict and there were questions “about what the outcome of such an encounter might be.”

But Luke Coffey, director of the Foreign Policy Center at the Heritage Foundation, a conservative think tank, doubted Iran would retaliate in a major way.

“Iran has very limited ability or options to retaliate against U.S. forces in the region without suffering an overwhelming U.S. response,” Coffey said.

“I think Tehran knows this so they will stick to low-level tactics like harassing U.S. ships in the Gulf. This will be just enough to be annoying but not enough to be considered ‘retaliating,'” he said.