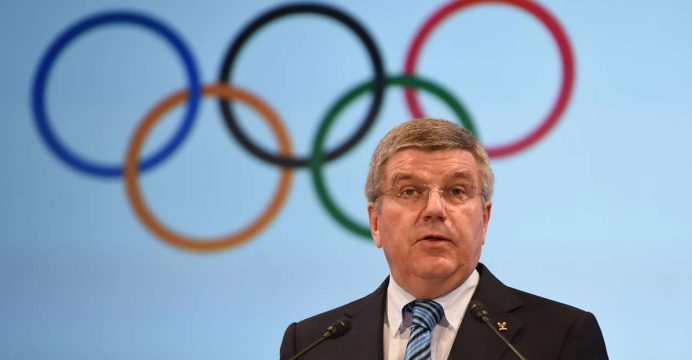 The source gave no further details about the meeting, which comes a day after Bach announced a new IOC sponsorship deal with chipmaker Intel Corp in New York that is set to run until 2024.

Trump has publicly backed the Los Angeles 2024 Games bid but has so far had no active involvement in the campaign.

LA 2024 bid chief Casey Wasserman said last month Trump had given strong support to the West Coast city in its efforts to secure the Games.

“Donald Trump has done everything we could have asked to support our bid,” entertainment executive Wasserman said in May.

“Every letter, every phone call … to President Bach… from what we need from the federal government, he’s been all I would hope for.”

Trump’s predecessor Barack Obama did not meet the IOC at the White House but travelled to the IOC session in Copenhagen in 2009 to back Chicago’s 2016 Games bid.

However, Chicago crashed out in the first round, with U.S.-IOC ties strained at the time over revenue-sharing deals from sponsorship and broadcasting rights.

The IOC has said it is planning to award both the 2024 and the 2028 Games at its session in September in Lima, Peru, and that Paris and Los Angeles are likely to share them among themselves.

Earlier this month the IOC passed a recommendation for a double awarding, which will now be ratified in a July session with the final order to be decided in Lima.

Los Angeles bid officials have repeatedly signalled that the city would be open to being awarded the 2028 Olympics instead of those four years earlier. Paris has insisted its bid plan could only work for 2024.

The IOC has now launched a reform process for bidding in order to make the Games a more attractive prospect to potential host cities.