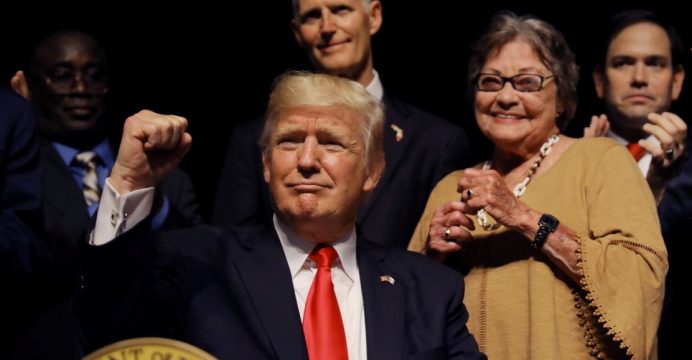 President Donald Trump on Friday ordered tighter restrictions on Americans traveling to Cuba and a clampdown on U.S. business dealings with the Caribbean island’s military, saying he was canceling former President Barack Obama’s “terrible and misguided deal” with Havana.

Laying out his new Cuba policy in a speech in Miami, Trump signed a presidential directive rolling back parts of Obama’s historic opening to the Communist-ruled country after a 2014 diplomatic breakthrough between the two former Cold War foes, reports Reuters.

But Trump left in place many of Obama’s changes, including the reopened U.S. embassy in Havana, even as he sought to show he was making good on a campaign promise to take a tougher line against Cuba, especially over its human rights record.

“We will not be silent in the face of communist oppression any longer,” Trump told a cheering crowd in Miami’s Cuban-American enclave of Little Havana, including Republican Senator Marco Rubio of Florida, who helped forge the new restrictions on Cuba.

“Effective immediately, I am canceling the last administration’s completely one-sided deal with Cuba,” Trump declared as he made a full-throated assault on the government of Cuban President Raul Castro.

Cuba later denounced the move as a setback in U.S.-Cuban relations, saying Trump had been badly advised and was resorting to “coercive methods of the past” that were doomed to fail. The government remained willing to engage in “respectful dialogue,” it said in a statement.

Trump’s revised approach calls for stricter enforcement of a longtime ban on Americans going to Cuba as tourists, and seeks to prevent U.S. dollars from being used to fund what the Trump administration sees as a repressive military-dominated government. (tmsnrt.rs/2rBfMTI)

But, facing pressure from U.S. businesses and even some fellow Republicans to avoid turning back the clock completely in relations with Cuba, the president chose to leave intact some of his Democratic predecessor’s steps toward normalization.

The new policy bans most U.S. business transactions with the Armed Forces Business Enterprises Group, a Cuban conglomerate involved in all sectors of the economy. But it makes some exceptions, including for air and sea travel, according to U.S. officials. This will essentially shield U.S. airlines and cruise lines serving the island.

“We do not want U.S. dollars to prop up a military monopoly that exploits and abuses the citizens of Cuba,” Trump said, pledging that U.S. sanctions would not be lifted until Cuba frees political prisoners and holds free elections.

While the changes are far-reaching, they appear to be less sweeping than many U.S. pro-engagement advocates had feared.

His critics, however, have questioned why his administration is now singling out Cuba for human rights abuses but downplaying the issue in other parts of the world, including Saudi Arabia, a close U.S. ally Trump visited last month where political parties and protests are banned.