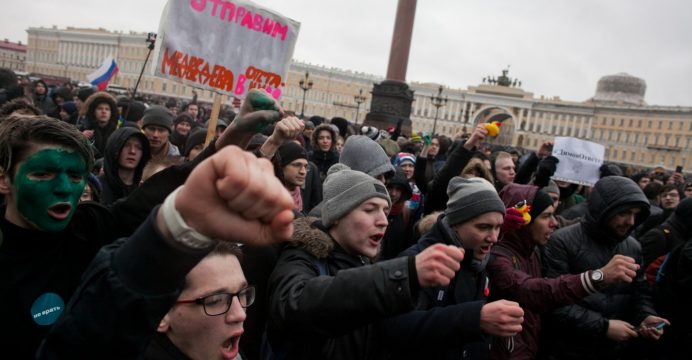 Turkey’s prime minister urged the head of the main opposition party on Friday to end a 425 kilometer (265 mile) march from Ankara to Istanbul in protest over the jailing of one of his lawmakers, saying justice “cannot be sought on the streets”.

Kemal Kilicdaroglu, 68, head of the secularist Republican People’s Party (CHP), set out on the march on Thursday after Enis Berberoglu was jailed for 25 years on spying charges. He was seen off by thousands of supporters and has garnered much attention in a country where government dominates the media, reports Reuters.

Kilicdaroglu trudged along a highway outside Ankara on Friday dressed in dark slacks and blue shirt. Sunburned and wearing a cap, he carried a sign that said “Justice”.

Rights groups and government critics, including members of Kilicdaroglu’s CHP, say Turkey is sliding toward authoritarianism, citing a crackdown that followed last year’s failed coup that has seen more than 50,000 people jailed and 150,000 sacked or suspended from their jobs.

“I advise Kilicdaroglu to desist from this act,” Prime Minister Binali Yildirim told reporters. “Justice cannot be sought on the streets, Turkey is a state of law… Even if we don’t like a court’s ruling, we have to respect it.”

Berberoglu was accused of giving the Cumhuriyet newspaper a video it used as the basis of a May 2015 report that alleged trucks owned by the state intelligence service (MIT)were stopped and found to contain arms and ammunition headed for Syria.

Berberoglu is the first CHP lawmaker to be jailed in the government crackdown, which has seen eleven members of parliament from the pro-Kurdish opposition party jailed.

Kilicdaroglu has called the arrest “lawless” and motivated by the presidential palace, a reference to President Tayyip Erdogan. His march, planned to end at the Istanbul prison where Berberoglu is being held, is expected to take more than 20 days.