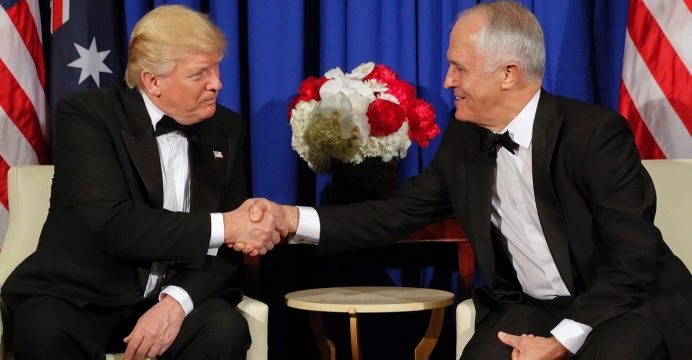 Australian Prime Minister Malcolm Turnbull has made fun of U.S. President Donald Trump and alluded to his ties with Russia, according to a leaked tape of an off-the-record media event.

Turnbull, who had a frosty first telephone call with the U.S. president early this year, was recorded mimicking Trump at a media ball at Parliament House in Canberra late on Wednesday, which was strictly off the record.

An Australian journalist later broadcast the recording saying because he had not been at the event, he was not bound by the confidentiality rule, reports Reuters.

Turnbull later told the 3AW radio station he was disappointed by the leak, which he said was a breach of protocol.

He said his “affectionately light-hearted” speech was a “good humored roast” in which he was the butt of his own jokes.

The U.S. embassy in Canberra said it understood that the Mid-Winter Ball was the equivalent of the White House Correspondents’ Dinner, an annual Washington event at which the media and president traditionally rib each other.

“We take this with the good humor that was intended,” the embassy said.

Turnbull was one of the first foreign leaders Trump spoke to after he took office on Jan. 20.

During their telephone call, the president became irritated about an agreement made by his Democratic predecessor, Barack Obama, to accept as many as 1,250 refugees held in Australian processing centers on remote Pacific islands.