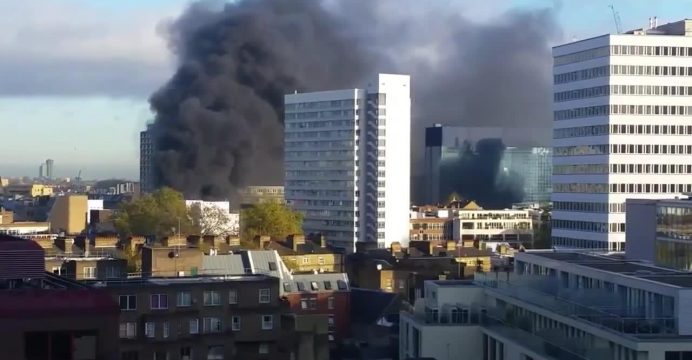 A huge fire engulfed a 27-storey block of flats in central London on Wednesday injuring a number of people and possibly trapping some residents inside the towering inferno.

Massive flames licked up the sides of the block as 200 firefighters battled the blaze along with 40 fire engines. Flumes of black and gray smoke billowed into the air over London hours after the blaze was sparked.

London Fire Brigade said the fire had engulfed all floors from the second to the top of the Grenfell Tower on the Lancaster West Estate in west London, reports Reuters.

“We are dealing with a really serious fire that spread throughout the building,” a spokesman for the fire brigade said. “The crews are doing all that they possibly can to tackle this fire.”

Some people were trapped in the fire, with residents desperately shouting for help from windows on upper floors as the fire spread, some British media reported.

Reuters could not confirm those reports. A witness told Reuters that she feared not all the residents had escaped the fire. Some were evacuated in their pyjamas.

“A number of people are being treated for a range of injuries,” police said. “Residents continue to be evacuated from the tower block fire.”

More than 20 ambulance crews were at the scene. London Mayor Sadiq Khan said a “major incident” had been declared. Police closed the A40, a major road leading out of west London.

The cause of the fire, which broke out just after 0000 GMT, is not known at this stage, the Fire Brigade said.