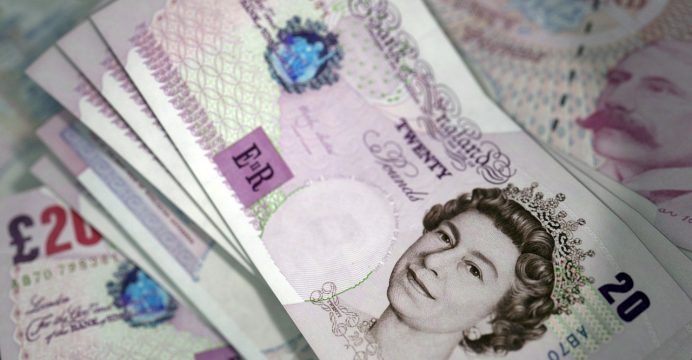 The British pound rebounded on Tuesday from post-election lows as surging inflation sparked talk of possible interest rate hikes, while US stocks closed at records as technology shares rallied.

Near 2030 GMT, the pound rose to $1.2752, up 0.8 percent from the day earlier level, following official data showing British Consumer Price Index (CPI) inflation spiked to a near four-year peak of 2.9 percent in June, reports BSS.

The Bank of England (BoE), led by Governor Mark Carney and tasked with keeping inflation close to a 2.0-percent target, will announce its latest interest rate decision on Thursday. British inflation had held close to zero throughout 2015 — but has surged since then as a weak Brexit-hit pound raises import costs.

The pound on Friday tumbled to a seven-week low at $1.2636 in the wake of the election result. Investors are eager to see if Sterling can make a sustained recovery from last week’s surprising vote that saw Britain’s ruling Conservatives lose their majority, and threw the country into uncertainty days before key Brexit talks.

In equity markets, London edged lower, while Paris and Frankfurt gained. In the US, both the Dow and S&P 500 finished at fresh records after technology stocks shook off a two-day slump to lead the market higher ahead.

Investors seemed to breathe a sigh of relief after a two-day retreat in Apple, Facebook and other high-flying technology shares reversed direction as investors stepped in to take advantage. Some investors had worried the pullback in tech stocks might be a harbinger of a correction in the broader market.

“With some of the losses that those stocks have suffered, investors are coming in and looking at getting those stocks cheaper, so I think that’s why you are seeing the market up today,” said Bill Lynch, director of investment at Hinsdale Associates.

The Federal Reserve opened its two-day policy meeting and is widely expected to raise interest rates at the conclusion on Wednesday.

Fed Chair Janet Yellen’s quarterly press conference will be scrutinized for signs of whether further tightening is likely this year — something increasingly in doubt — and for details on the plan to reduce the size of the central bank’s securities holdings.