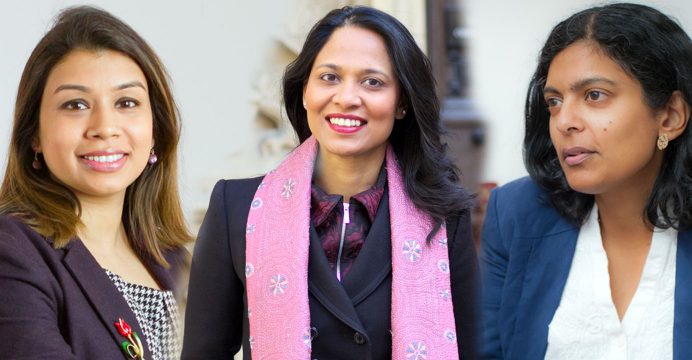 Tulip, Sheikh Rehana’s daughter and Prime Minister Sheikh Hasina’s niece, retained her Hampstead and Kilburn seat with a margin of 15,560 votes. She polled 34,464 against her Conservative rival’s Claire-Louise Leyland 18,904.

“Humbled to be re-elected for my home seat of Hampstead and Kilburn! . . . Thank you all so much for your kind support,” Tulip tweeted after the huge victory.

Rushanara was also re-elected from Bethnal Green and Bow constituency by bagging 42,969 votes while her rival Conservative Party candidate Charlotte Chirico got 7,576.

“Thank you Bethnal Green & Bow from the bottom of my heart for re-electing me as your Member of Parliament. It is an honour and a privilege,” she wrote in her Twitter account.

Rupa retained the Ealing Central and Acton seat for Labour with 33,037 votes while her counterpart Conservative Party candidate Joy Morrissey got 19,230 votes.

The number of Bangladeshi-origin candidates in 2015 UK polls was 11, of which the three daughters recorded victory which their success appeared to have partly encouraged three more having identical nationalistic background to vie the crucial elections after Britain’s exit from European Union (EU), known as Brexit.

Of the 14 candidates 8 including the “three daughters” contested as Labour Party candidates, one as Liberal Democrat, one as Friends Party nominee and 4 as independent contenders. As many as 11 Bangladesh-origin candidates vied for seats in the House of Commons through in the 2015 UK elections while of them were nominated by Ed Miliband’s main opposition Labour Party, while three from Liberal Democrats and one from Conservative Party.

Prime Minister of Bangladesh Sheikh Hasina today extended her heartiest congratulations to Bangabandhu’s granddaughter Tulip Rizwana Siddiq, Rushanara Ali and Dr Rupa Huq on their reelection in the United Kingdom parliament polls, saying that they have brightened the face of the people of Bangladesh through the victory.