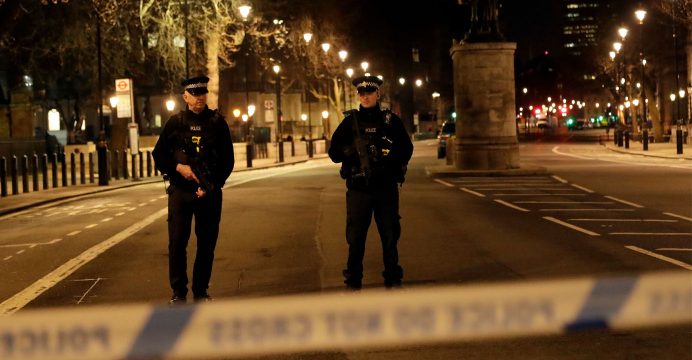 Two men were arrested by police “supported by firearms officers” on a street in Ilford, east London, the Metropolitan Police said in a statement.

A 27-year-old was detained on terrorism charges while the second, 33, was arrested on drugs charges.

The third suspect, 29, was apprehended at a home in the same area of the British capital. He was also taken into custody on “suspicion of the preparation of terrorist acts”, police said.

Searches were underway at the residential property and a business address in Ilford, the latest in a series of raids since the weekend assault.

Three assailants were shot dead by police on Saturday as they carried out a stabbing spree in London’s Borough Market, a warren of bars and restaurants, after mowing down pedestrians as they drove a van across London Bridge.

Eight people were killed in the attack, including a Frenchman whose body was found in the River Thames on Tuesday, and 48 people were hospitalised.

The latest arrests come on the eve of Britain’s general election on Thursday, after a political campaign marred by the London attack and a suicide bombing in Manchester last month.

The Metropolitan Police said they had reviewed security ahead of the vote, putting in place a “specialist and highly flexible operation” which can be deployed as needed.

Since the attack a total of 17 people have been arrested, 12 of which have since been released without charge.

Counter terror officers arrested a 30-year-old man in Ilford on the early hours of Wednesday morning, after a 27-year-old man was taken into custody in Barking, east London, on Tuesday.