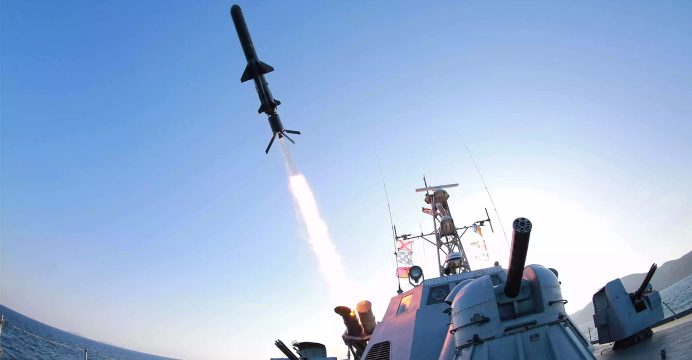 North Korea launched a volley of surface-to-ship cruise missiles off its east coast Thursday, Seoul’s defence ministry said, the latest in an accelerating series of tests defying global pressure to rein in its weapons program.

The launches come less than a week after the United Nations expanded sanctions against Pyongyang in response to recent ballistic missile tests.

The short range missiles flew for some 200 kilometres (124 miles) at an altitude of two kilometres before falling into the Sea of Japan, the ministry added.

Thursday’s launches are the North’s fifth round of tests three ballistic missile launches, a surface-to-air missile and now the cruise missiles since the South’s new president Moon Jae-in took power in early May.

“The only thing North Korea will earn through provocations is international isolation and economic hardship, and it will lose opportunities for development,” Moon said at a meeting of the National Security Council Thursday, according to Blue House spokesman Park Soo-Hyun. Seoul “will not take a single step back or make compromises over the issue of national security or the safety of its people,” Moon said, according to his spokesman.

Thursday’s launch “was aimed at showing off various missile capabilities and antiship precision strike capability,” a spokesman for South Korea’s Joint Chiefs of Staff told reporters, adding it did not appear to have violated UN sanctions.

Cruise missile tests do not contravene UN regulations, Korea Defence Network analyst Lee Il-Woo told AFP, adding they were “much slower than ballistic missiles and can be shot down by anti-aircraft guns”.

“North Korea is carrying out carefully calibrated provocations… but restraining from ICBM tests or nuclear explosions which could bring about military retaliations by (US President Donald) Trump,” he added.

The UN Security Council last Friday unanimously adopted a US-drafted resolution imposing new targeted sanctions on a handful of North Korean officials and entities, in response to the recent tests.

North Korea described the latest UN sanctions as “mean” and warned they would not stop its missile and nuclear weapons programmes.

China, the reclusive regime’s sole major ally, has made it clear that a push for talks and not more sanctions is its priority.

The new tests come a day after South Korea suspended deployment of a controversial US missile defence system an apparent concession to China, which is strongly opposed to the Terminal High Altitude Area Defense (THAAD) system.