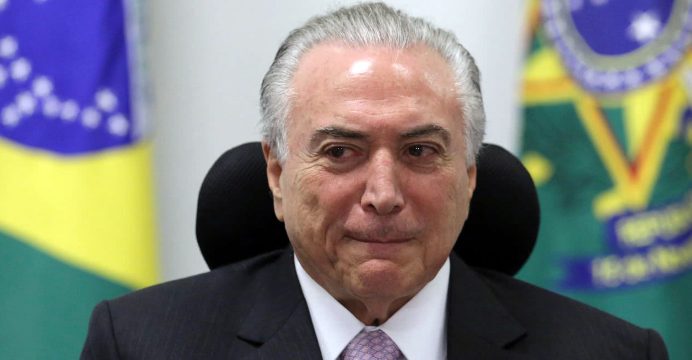 The Supreme Electoral Tribunal (TSE) opened the first of four scheduled sessions to decide whether the 2014 reelection of president Dilma Rousseff and her then-vice president Temer should be invalidated because of corrupt campaign funding.

If the seven-judge panel votes to scrap the election result, Temer — who took over only last year when Rousseff was impeached — would himself risk losing his office.

The conservative president, who faces a separate, potentially devastating corruption probe, says the election court will absolve him.

“Temer should not have to pay the price for the history of corruption in Brazil,” Temer’s lawyer Gustavo Guedes said.

But Nicolao Dino, a deputy prosecutor, said there had been “a clear abuse of economic power.”

If found guilty, Temer would be able to appeal. A judge on the TSE could also decide to adjourn the court hearings, scheduled to end Thursday, with the whole process potentially still dragging on for some time.

There was a heavy police presence at the election court in the capital Brasilia, with only a small protest by leftwing demonstrators outside.

Temer cancelled a previously announced official event to watch the court session on television from the presidential palace, with several loyal ministers and congressmen for company, according to local media.