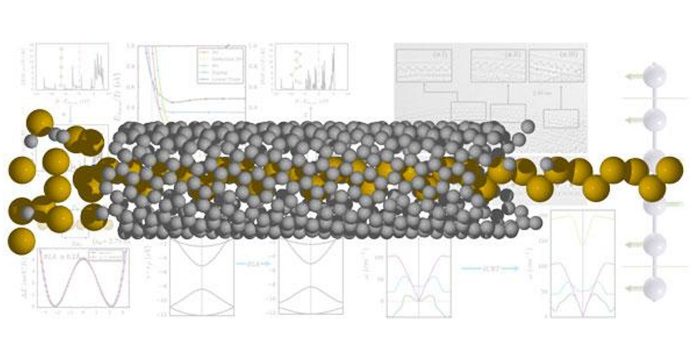 Researchers have developed the world’s thinnest metallic nanowire, which could be used to miniaturise many of the electronic components we use every day.

The researchers, from the Universities of Cambridge and Warwick, have developed a wire made from a single string of tellurium atoms, making it a true one-dimensional material. These one-dimensional wires are produced inside extremely thin carbon nanotubes (CNTs) – hollow cylinders made of carbon atoms. The finished ‘extreme nanowires’ are less than a billionth of a metre in diameter – 10,000 times thinner than a human hair.

A single string of atoms is as small as materials based on elements in the periodic table can get, making them potentially useful for semiconductors and other electronic applications. However, these strings can be unstable, as their atoms are constantly vibrating and, in the absence of a physical constraint, they can end up morphing into some other structure or disintegrating entirely.

According to the Cambridge researchers, encapsulating the nanowires is not only a useful method of making stable one-dimensional (1D) materials, it may be necessary to prevent them from disintegrating. The researchers have also shown that it is possible to alter the shape and electronic behaviour of the nanowires by varying the diameters of the tubes which encapsulate them. Their results are reported in the journal ACS Nano.

To make electronics faster and more powerful, more transistors need to be squeezed onto semiconductor chips. For the past 50 years, the number of transistors on a single chip has doubled every two years – this is known as Moore’s law. However, we are getting close to the limit of how small a transistor can be before quantum effects associated with individual atoms and electrons start to interfere with its normal operation. Researchers are currently investigating various ways of keeping up with Moore’s law, and in turn keeping up with our desire for faster, cheaper and more powerful electronics. One-dimensional materials could be one of the solutions to the challenge of miniaturisation.

The Cambridge researchers first used computer simulations to predict the types of geometric structures that would form if tellurium atoms were injected into nanotubes, and found that 1D wires could exist in such a scenario.

Later, lab-based tests, using the most advanced techniques for the synthesis and atomic-resolution visualisation of such extreme materials, were performed by the Warwick researchers to confirm the theoretical predictions. Not only were the researchers able to successfully ‘build’ stable 1D wires, but they found that changing the diameter of the nanotubes lead to changes in the properties of tellurium.

Tellurium normally behaves as a semiconductor, but when injected into carbon nanotubes and confined to one dimension, it starts behaving like a metal. Additionally, while the confinement provided by the CNTs can induce drastic changes in the way that tellurium behaves, the nanotubes themselves do not interact in any other way with the tellurium nanowires.

“When working with materials at very small scales such as this, the material of interest typically needs to be deposited onto a surface, but the problem is that these surfaces are normally very reactive,” said Paulo Medeiros of Cambridge’s Cavendish Laboratory, and the paper’s first author. “But carbon nanotubes are chemically quite inert, so they help solve one of the problems when trying to create truly one-dimensional materials.

“However, we’re just starting to understand the physics and chemistry of these systems – there’s still a lot of basic physics to be uncovered.”