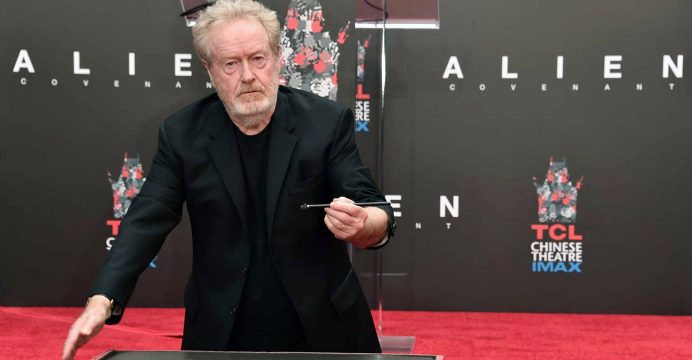 The veteran British director, who made the groundbreaking original movie in the long-running action horror series in 1979, is readying to release the sixth film, “Alien Covenant,” in the United States on Friday.

“It’s (about) origin of the species, and have we failed or have we not failed? And are we going to correct ourselves? Sounds highbrow, doesn’t it? But this thing will still scare the shit out of them,” he told AFP, summing up the movie.

The 79-year-old director offered his thoughts on his latest project and filmmaking in general ahead of becoming the 304th star to sink his handprints and footprints into cement at the TCL Chinese Theatre, a tradition for Hollywood’s creme de la creme.

Scott chose the occasion to rail against the California tax system, which he said was not encouraging filmmakers who have left over the years to return to Hollywood.

Nine projects including Fox series “Scream Queens” and “American Horror Story” were allocated a total of $37.6 million in tax breaks last year as part of an expanded scheme designed to attract studios back.

But Scott told AFP it was “a pity” that California couldn’t stretch to the kind of rebates that have been successful back home in Britain.

Scott’s directing credits over a genre-straddling career spanning more than 50 years have included acclaimed works such as “Thelma and Louise” (1991), “Gladiator” (2000) and the Golden Globe winning “The Martian” (2015).