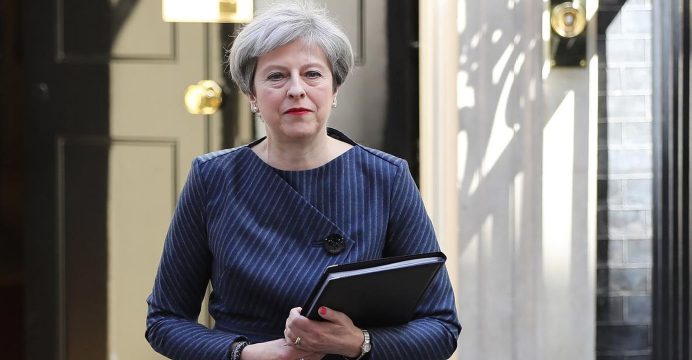 British Prime Minister Theresa May will on Thursday promise to crack down on immigration from outside the European Union as she unveils the Conservative Party’s manifesto, the BBC reported.

May will promise to “bear down on immigration from outside the EU” by asking firms to pay more to hire migrant workers.

The Prime Minister is expected to announce extra costs for employers choosing to hire non-EU workers for skilled jobs by doubling the Skills Charge.

Migrant workers will also be asked to pay more to use the National Health Service, according to the BBC.

The revenue generated will fund skills training for British workers.

May is hoping the new measures will curb immigration from outside the EU to the tens of thousands a year, a pledge the Conservatives have made and failed at for the past seven years.

In the year to September 2016, immigration to the UK was estimated to be 596,000, of which 257,000 were non-EU citizens according to the official statistics agency.

“When immigration is too fast and too high, it is difficult to build a cohesive society,” she is expected to say.

May will also commit to reducing immigration from the European Union once its divorce from the bloc is finalised.

“This means the end of freedom of movement,” sources told the BBC.

May has repeatedly said Britain as a whole is pulling out of the single market in order to be able to limit immigration from other parts of the EU.

This is in contrast to the centrist Liberal Democrats party which on Wednesday promised to keep Britain in the European single market and continue freedom of movement.