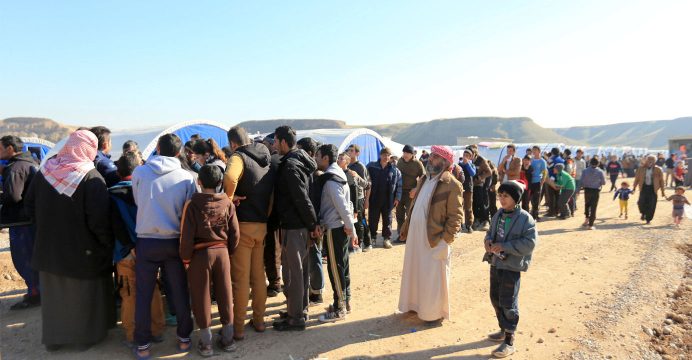 It was hard enough coping with flight from conflict-hit areas during the winter months. Now, for the hundreds of thousands of Internally Displaced Persons (IDPs) from Mosul, summer heat is the new challenge. Having survived ISIL, most families are now bracing themselves to battle their second most dangerous enemy – the sizzling sun and the sweltering temperatures that come with it.

With temperatures nearing 37° Celsius and rising, the coming months will be trying, according to the UN Migration Agency (IOM) communications officer Hala Jaber, reporting from the Qayara emergency site south of the embattled zone.

IOM’s emergency site at the former Qayara airstrip hosts over 52,000 displaced Iraqis or 8,746 families. The scorching heat is already having an impact on both health and living conditions for individuals living at the site.

From June onwards, temperatures in Iraq’s Ninewa governorate will hit, and on some days, surpass the 50° mark. The PVC tents that provided residents with much warmth during the cold winter months will be hard to tolerate in summer, as temperatures inside register at least 10° higher than outside.

“We are now sleeping outdoors to keep cool,” said Abu Omar, a displaced individual at the site. “It is literally impossible to bear the heat inside the tent.”

With the Qayara site at full capacity, IOM teams are in the process of ensuring that all IDP families are equipped with the basic materials that will help alleviate some of the summer’s discomfort.

Winter kits that have been modified for hotter days are being prepared for distribution to an estimated 7,790 families, in both Qayara and the neighboring Haj Ali camp.

The supplementary mini kits will include 40-litre capacity cool boxes, battery-rechargeable fans that can continue to run an extra four hours when power is down, plastic sheets to replace the thick winter carpets and summer bed linens.

Another 5,400 or so summer kits have already been distributed to IDP families from West Mosul, who have arrived in the emergency sites since the end of March 2017.

IOM’s primary health centres in both Qayara and Haj Ali, home to 34,000 people, each serve an average of 1,800 patients per week with medication. Displaced people with scabies, mostly from neighbouring camps, have also been seeking treatment in IOM’s medical centre in Qayara, prompting the primary health care to set specific morning hours, exclusive to these cases.

In Qayara, an unfamiliar stillness has replaced the usually active emergency site during the heat of the day. Fewer children now play along the pathways between the rows of tents and the hustle and bustle, normally created by the crowds of men and women going about their daily chores, has drastically decreased.

Winter colds and flus have now been replaced by diarrhea and dehydration, with an increase in cases among children, and IOM’s medical team has had to order different medications to tackle the summer ailments.

Thaer, 37, has just returned to Qayara with his youngest boy, a six-month-old infant, who spent two days in a hospital run by Médecins sans Frontières. The baby was treated for acute dehydration. Thaer and his children, as many IDPs are now doing, sleep outside their tent to escape the suffocating heat inside.

“During the day, the tents are very hot and at night unbearable with all of us inside. So, I and my older children are sleeping outside the tent to escape the heat,” he said.