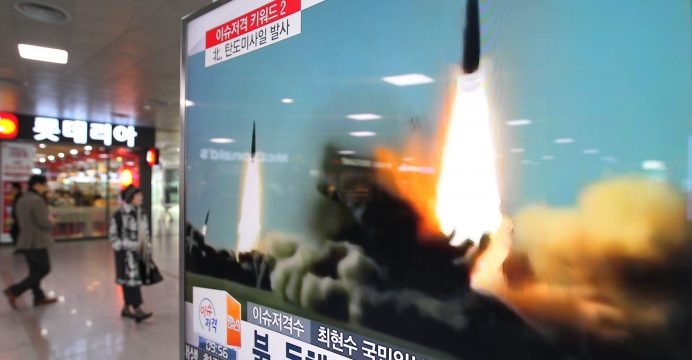 North Korea has claimed that the missile it tested on Sunday was a new type of rocket capable of carrying a large nuclear warhead.

The missile, launched at a steep angle, reached an altitude of 2,000km (1,242 miles) and travelled about 700km, landing in the sea west of Japan.

North Korea said on Monday it was a test of the abilities of a “newly developed ballistic rocket”.

South Korea’s military said it could not yet verify the North’s claims.

But it said the North’s missiles did appear to be able to leave and re-enter the atmosphere, which is crucial to developing intercontinental ballistic missiles (ICBMs), the Yonhap news agency reported.

Repeated missile tests by the North this year – not all of them successful but all a breach of UN sanctions – have sparked international alarm and raised tensions with the US.

The US and Japan have called for an emergency meeting of the UN Security Council on Tuesday.

“The test-fire aimed at verifying the tactical and technological specifications of the newly developed ballistic rocket capable of carrying a large-size heavy nuclear warhead,” it said.