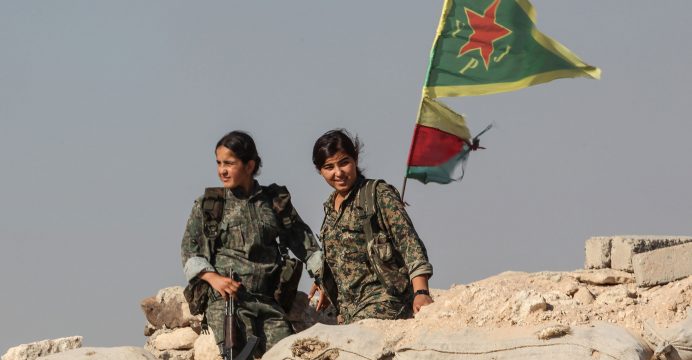 Turkey warns U.S. of blowback from decision to arm Kurdish fighters in Syria

Turkey warned the United States on Wednesday that a decision to arm Kurdish forces fighting Islamic State in Syria could end up hurting Washington, and accused its NATO ally of siding with terrorists.

The rebuke came a week before President Tayyip Erdogan is due in Washington for his first meeting with U.S. President Donald Trump, who approved the arms supply to support a campaign to retake the Syrian city of Raqqa from Islamic State.

Turkey views the YPG as the Syrian extension of the outlawed Kurdistan Workers Party (PKK), which has fought an insurgency in southeast Turkey since 1984 and is considered a terrorist group by the United States, Turkey and Europe, reports Reuters.

“We want to believe that our allies will prefer to side with us, not with a terrorist organization,” Erdogan told a news conference in Ankara, saying he would convey Turkey’s stance to Trump next week and at a NATO summit later this month.

He said he hoped that recently taken decisions would be changed by the time he visits the United States.

Earlier, Prime Minister Binali Yildirim told reporters the U.S. failure to consider Turkey’s sensitivities “will surely have consequences and will yield a negative result for the U.S. as well”.

The United States regards the YPG as a valuable partner in the fight against Islamic State militants in northern Syria. Washington says that arming the Kurdish forces is necessary to recapturing Raqqa, Islamic State’s de facto capital in Syria and a hub for planning attacks against the West.

That argument holds little sway with Ankara, which worries that advances by the YPG in northern Syria could inflame the PKK insurgency on Turkish soil.

Weapons supplied to the YPG have in the past fallen into PKK hands, said Turkish Foreign Minister Mevlut Cavusoglu.