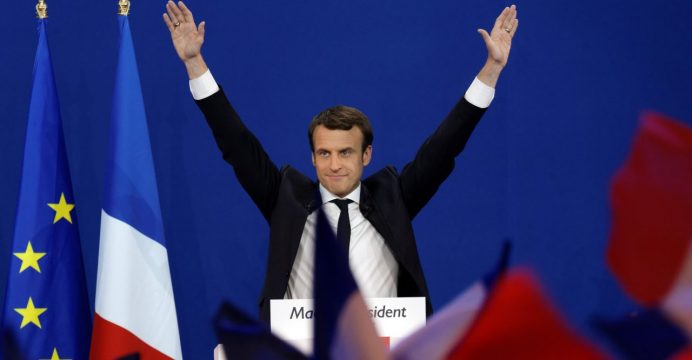 Emmanuel Macron has triggered a political earthquake in French politics.

A year ago, he was a member of the government of one of the most unpopular French presidents in history.

Now, at 39, he has won France’s presidential election, defeating first the mainstream centre left and centre right and now the far right as well. No doubt about it, Mr Macron was carried to victory in part by the winds of fortune.

“He was very lucky, because he was facing a situation that was completely unexpected,” says Marc-Olivier Padis, of Paris-based think tank Terra Nova.

Mr Macron could have gone for the Socialist ticket, but he realised after years in power and dismal public approval ratings the party’s voice would always struggle to be heard.

“He was able to foresee there was an opportunity when nobody could,” says Mr Padis.

Instead, he looked at political movements that have sprung up elsewhere in Europe – Podemos in Spain, Italy’s Five-Star Movement – and saw that there was no equivalent game-changing political force in France.

In April 2016, he established his “people-powered” En Marche! (On the move) movement and four months later he stood down from President François Hollande’s government.

He tried something new in France

His first major undertaking was the Grande Marche (Big March), when he mobilised his growing ranks of energised but inexperienced En Marche activists.

“The campaign used algorithms from a political firm they worked with – who by the way had volunteered for the Obama campaign in 2008 – to identify districts and neighbourhoods that were most representative of France as a whole,” Ms Schultheis says.

The volunteers didn’t just hand out flyers – they carried out 25,000 in-depth interviews of about 15 minutes with voters across the country. That information was entered into a large database which helped inform campaign priorities and policies.

“It was a massive focus group for Macron in gauging the temperature of the country but also made sure that people had contact with his movement early on, making sure that volunteers knew how to go door to door. It was a training exercise that really laid the groundwork for what he did this year,” Ms Schultheis explains.

And he capitalised on it.

He had a positive message

The “newcomer” who was President Hollande’s protege and then economy minister; the ex-investment banker running a grassroots movement; the centrist with a radical programme to slash the public sector.

It was perfect ammunition for run-off rival Marine Le Pen, who said he was the candidate of the elite, not the novice he said he was.