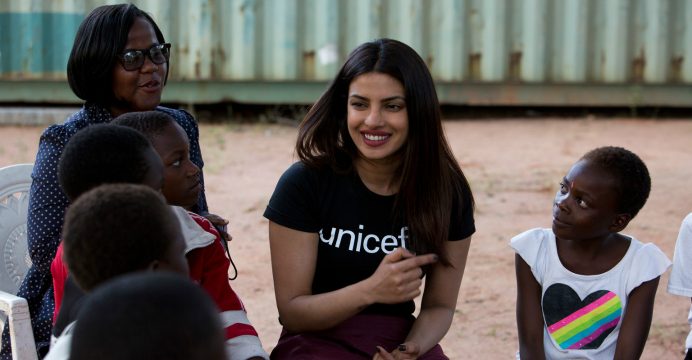 UNICEF Goodwill Ambassador Priyanka Chopra has called for increased awareness and support for child victims of sexual violence. The actress made an emotional visit to Zimbabwe this week, where she met child survivors of sexual violence and heard their harrowing stories.

“When I met these survivors, young brave women and children, and listened to their experiences, it just broke my heart,” said Chopra. “I will never forget their stories.”

Chopra’s first stop was in Chitungwiza, south of Harare, Zimbabwe, where she met 13-year-old Alice who was repeatedly raped by an uncle and threatened if she revealed the abuse. 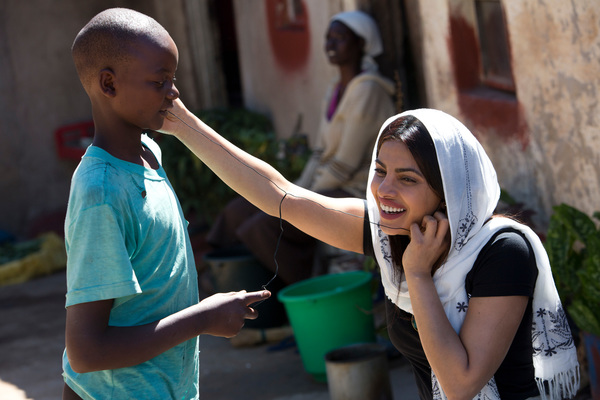 “Alice told me how she had regular abdominal pains, she was 11 at the time, but her mother was unaware there was something wrong,” said Chopra. “It was only when a relative saw condoms in her

“It was only when a relative saw condoms in her bedroom and realized she was sexually active, that the truth came out and by then she was pregnant. Alice disclosed that her uncle had raped her several times between January and February this year.”

“At first, she could not believe that her own relative, who she trusted so much, could do this to her. She felt powerless and betrayed.”

With the help of her mother and neighbors, the incident was reported to the police. Alice was referred to Family Support Trust, supported by UNICEF, which runs a “one stop” child-friendly clinic providing medical and psychosocial support for sexually abused children. She also attended a peer support group for teens and received regular home visits from social workers to provide the help and support she needed.

“Sadly, Alice’s story was just one of too many stories I heard from brave young girls during my visit to Zimbabwe. No woman, and most definitely no child, should ever have to experience sexual violence – especially from someone they trust for protection, such as a family member,” said Chopra, who has been a UNICEF Goodwill Ambassador since December 2016 and a UNICEF India Ambassador for 10 years.

Poverty and a lack of opportunity are huge drivers of violence and leave young women and children in a position of vulnerability to predators. Additionally, most abuse occurs in situations when a child knows and trusts the adult who abuses him or her.

“As a society, it is on us to provide and take care of our children as citizens of the world, to educate children at a young age that it’s not OK to be inappropriately touched and that under-age sex can lead to unwanted teen pregnancy or HIV,” said Chopra.

On the second day of her visit, Chopra visited Childline Zimbabwe, the country’s 24-hour service for children who have been abused, violated or exploited. As well as providing free, confidential, multilingual counseling to children aged 18 years and under, Childline also offers 25 community based drop-in centers throughout the country.

Her first stop was a Childline drop-in center in Epworth, where she met survivors of sexual violence who shared their stories. Chopra then visited the Childline call-in center to meet the Helpline counselors and listen to some of the calls being fielded in real-time.

“I was astonished by the number of calls that were coming in during the brief time I was there,” said Chopra. “The counselors, all volunteers, told me that many calls come from children in hysterics because they had been raped or abused. They were so scared. Without Childline, they would have nowhere to turn. This is a model that many countries with high rates of violence against children can adopt because it is a safe place for children to turn to and know that their call will be answered by a compassionate person who will take their complaints seriously and respond.”

In 2016, 3,690 reports of sexual abuse were received by Childline. The children were assisted in receiving counselling, medical assistance, and justice through prosecution of the offenders.

Sexual violence against children is widespread in Zimbabwe. Latest available data shows that close to 1 in 10 girls aged 15-17 years old has been a victim of forced sexual intercourse or a forced sexual act. Approximately 2 in 3 victims were first abused by an intimate partner and approximately 1 in 10 by a stranger.

Too often, sexual violence occurs in homes and is often committed by an individual known to or trusted by the child. Sexual violence against children is therefore mostly invisible and goes largely undocumented. Fear of getting into trouble or not wanting to land the offender in trouble, as well as shame and stigma all contribute to children not reporting the abuse. Additionally, many victims are too young or too vulnerable to know what happened to them.

One survey carried out in Zimbabwe found that 30 per cent of girls aged between 15-17 years who experienced sexual violence never sought help or told anyone.