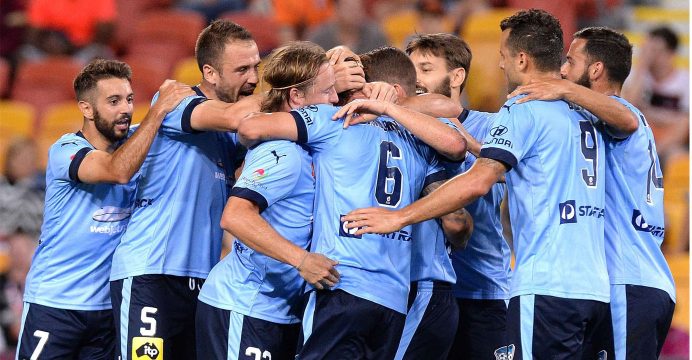 Record-breaking Sydney FC put all on the line in decider

Sydney FC, coming off a record-breaking season with just one defeat, will put it all on the line against Melbourne Victory in Sunday’s Australian A-League grand final in Sydney.

The Sky Blues have been hailed the A-League’s greatest team after finishing the regular season with a record 66 points from 20 wins in 27 games and 17 points ahead of the nearest rivals Victory.

Yet under the unique nature of Australian finals football, Sydney FC will have to beat Melbourne Victory for a fourth time this season to lift their third A-League championship.

Graham Arnold, also named coach of the season by the PFA, is chasing his second A-League championship after winning with his former club Central Coast Mariners in 2012-13.

“It’s what we do every week. You couldn’t imagine me standing here saying we expect to lose.”

Sydney’s forward line, led by skipper Alex Brosque, Brazilian Bobo and
Slovak Filip Holosko, have scored 34 goals between them, with playmaker Ninkovic chipping in with nine goals and 11 assists.

But it is Sydney’s defence that has been the hallmark of their outstanding season with just 12 goals conceded in 28 league games.

Against all this, Victory are talking up their chances of upsetting Sydney on their own ground in the season decider.

“If you look at all our games (against Sydney this season), we’ve had quite a lot of opportunities, we just couldn’t take them,” Socceroo midfielder James Troisi said.

“I don’t think it’s near impenetrable. They are vulnerable.”

Kosovo striker Berisha, the A-League’s all-time leading scorer with 101 goals, scored the only goal of their semi-final win over Brisbane Roar last week with his 20th strike of the season.

New Zealander Rojas, dubbed the ‘Kiwi Messi’ for his trickery and attacking skills, has chimed in with 12 goals.

Melbourne Victory, coached by Kevin Muscat, will be bidding to become the A-League’s all-time winners with their fourth championship if they surprise Sydney.