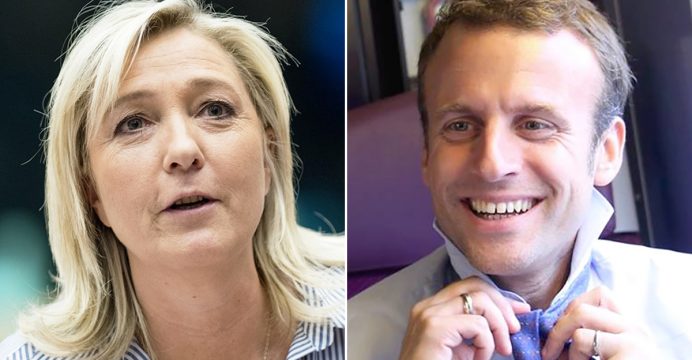 The two French presidential candidates have each claimed success in “exposing” their rival in the final TV debate ahead of Sunday’s second-round run-off.

Centrist Emmanuel Macron and the far-right’s Marine Le Pen traded insults for more than two hours, arguing over terrorism, the economy and Europe.

Mr Macron appeared to cement his position as the front-runner.

French pundits, newspapers and a highly regarded viewers’ poll all declared him the most convincing.

In an interview after Wednesday evening’s debate, Ms Le Pen said she had wanted to show French voters that Mr Macron was part of the old system.

“Above all I decided to lift the veil, with a certain amount of success I believe, on: Who is Mr Macron? Where does he come from? What are the interests he is defending? What is his vision for France?” she told BFMTV after the debate.

“Because the least one can say is that the fact that he is the darling of the system.”

Speaking to French radio on Thursday morning, Mr Macron said the debate had exposed the true nature of Ms Le Pen and her National Front party:

“Mrs Le Pen has shown something: it is that she does not love liberty. She’s shown it in how she relates with journalists, she’s shown it constantly in the positions that she has taken on same-sex couples, on women… and on the freedom of the press.

“And so one can be sure that with me, sure I’m totally committed to my project, but with me goes the total protection of the democratic framework within which we can disagree.”

Mr Macron enjoys a healthy lead in the opinion polls. But during the key debate, Ms Le Pen lambasted him on his record as economy minister in the Socialist government – a post he quit to form his En Marche! movement.

The National Front candidate accused him of being “the candidate of savage globalisation” and said his version of France “is a trading room, where it will be everyone fighting for themselves”.

In turn, Mr Macron said Ms Le Pen had openly lied, proposed nothing and exaggerated the concerns of the public.

“The high priestess of fear is sitting before me,” he said.

Ms Le Pen accused him of complacency about the threat of radical Islamist terrorism. “Security and terrorism are major issues that are completely missing from your programme,” she said.

But in response, Mr Macron said the measures she proposed – “eradicating” Islamic fundamentalism by shutting down extremist mosques, and expelling preachers of hate – were “snake oil” that played into terrorists’ hands and the desire they had for a “civil war”.

They also clashed on the future of the European Union – another issue where they are clearly opposed.

Ms Le Pen has said she would call for an in-out referendum on EU membership, and in recent days declared the euro currency finished.

This turned into a tense, at times incendiary exchange, between two leaders with starkly opposing ideas about the road France needs to take.

Marine Le Pen, who lags badly in the opinion polls, had clearly decided that the best tactic was to launch a full-frontal attack on Emmanuel Macron.

Constantly throughout the debate she threw insults and allegations at him, accusing him of being part of the discredited existing order.

But there was little substance to her attacks, and over and again Mr Macron was able to expose the weaknesses in her arguments – especially over the economy and the euro.

The debate will have done nothing to alter his position as clear favourite in Sunday’s vote.