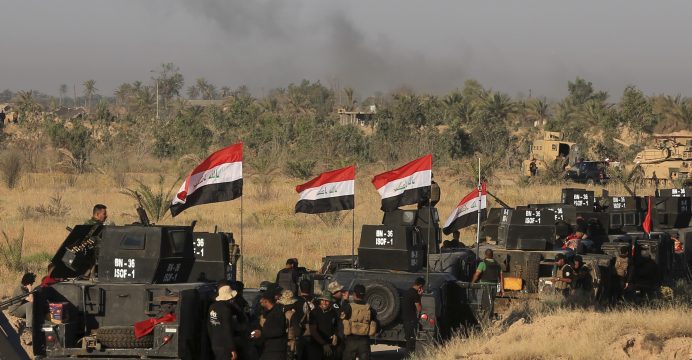 Iraqis open up new front to retake city from IS

Iraqi security forces say they have opened a new front in the operation against so-called Islamic State (IS) militants in north-western Mosul.

Troops from the army’s 9th Division and the police’s Rapid Response Force are now advancing on the Musharifa, Kanisa and Haramat districts from the north.

They will join troops who are pushing into the Old City from the south.

The troops launched a major offensive to recapture Mosul – the last major IS urban stronghold in Iraq – in October.

Supported by US-led coalition air strikes and military advisers, they managed to take full control of the eastern half of Mosul in January and started an assault on the west in February.

Coalition spokesman Col John Dorrian told reporters on Wednesday that the Iraqi troops advancing into the remaining IS-held districts were facing “very dangerous, difficult fighting”, but that they were making progress every day.

“I know that the Iraqi security forces are confident of their ability to finish the enemy in place in Mosul very soon,” he said.

On Sunday, Iraqi Army Chief of Staff Lt Gen Othman al-Ghanmi told the state-run Sabah newspaper that he expected the battle in the west to be completed “in a maximum of three weeks” despite the fierce resistance his troops had encountered in the densely-populated Old City.

The area includes the symbolically important Great Mosque of al-Nuri, where IS leader Abu Bakr al-Baghdadi proclaimed the establishment of a “caliphate” after Mosul and much of northern Iraq fell to the jihadist group in 2014.

Col Dorrian said the coalition believed there were “well short of a thousand” militants left in Mosul.