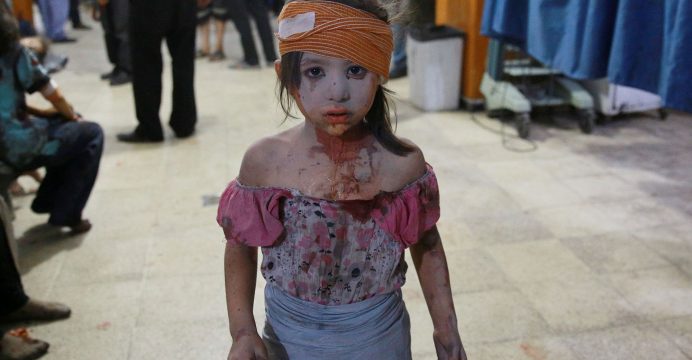 US President Donald Trump and Russian President Vladimir Putin have agreed to press for a ceasefire to halt the war in Syria.

The two spoke by telephone for the first time since the US launched air strikes against Syria nearly a month ago, straining relations.

Other topics discussed included North Korea and the timing of a future face-to-face meeting.

Mr Trump ordered cruise missile strikes on a Syrian government airbase following the deaths of more than 80 people in a suspected chemical weapons attack on the Syrian rebel-held town of Khan Sheikhoun on 4 April.

Syrian President Bashar al-Assad said the incident was fabricated, while Russia, Mr Assad’s main foreign backer, said at the time that it was caused by an air strike hitting a rebel depot containing chemical weapons.

However in a statement on Tuesday, Mr Putin called for a full investigation into the incident and condemned “any use of chemical weapons”.

A White House statement said: “President Trump and President Putin agreed that the suffering in Syria has gone on for far too long and that all parties must do all they can to end the violence.

“The conversation was a very good one, and included the discussion of safe, or de-escalation, zones to achieve lasting peace for humanitarian and many other reasons”.

The Kremlin statement said the two men had agreed to step up attempts to find ways to strengthen a ceasefire.

“The aim is to create the conditions for the launch for a real resolution process in Syria,” it added.

Neither statement disclosed whether the two leaders had discussed the cruise missile strike.

The White House also said Mr Trump and Mr Putin had also spoken about “how best to resolve the very dangerous situation in North Korea”.

The secretive communist state’s nuclear and ballistic missile programmes have raised tensions in the Asia-Pacific region, with Mr Trump saying last week that a “major, major conflict” was possible.

The Kremlin said: “The dangerous situation on the Korean peninsula was discussed in detail. Vladimir Putin called for restraint and for the level of tension to be reduced.”