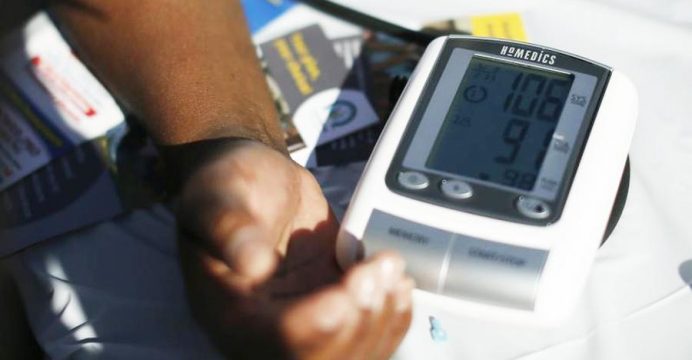 Home blood pressure monitors maybe too inaccurate to be useful

Even as doctors are increasingly relying on home blood pressure monitoring to manage patients with hypertension, many of the devices are too inaccurate to be useful, according to a small study.

Hypertension, or high blood pressure, “is the number one cause of death and disability in the world,” said lead study author Jennifer Ringrose of the University of Alberta in Canada.

Ringrose and colleagues gauged the accuracy of home blood pressure monitors used by 85 patients and tested for differences between upper-arm versus wrist devices, brand names, hard versus soft cuffs and devices that were validated according to industry technical standards and those that were not.

Two observers tested each patient simultaneously, taking a total of nine blood pressure measurements and alternating between the device used at home and a standardized cuff used in a doctor’s office.

Age and stiffness of blood vessels, for example, can make a significant difference if blood pressure monitors aren’t calibrated for the patient using it, the study authors write in the American Journal of Hypertension.

“There can be substantial error, even in devices that have been tested in a validation study,” said senior study author Raj Padwal of the Mazankowski Heart Institute in Alberta.

“A major issue is that it is hard to study why inaccuracies occur because the algorithm that these devices use to determine blood pressure is proprietary and kept secret by each company,” Padwal said by email.

The research team suggests creating a third-party way for both doctors and patients to check home devices if needed.

“First, patients should purchase a validated monitor and use the proper sized cuff,” Padwal said. “Second, we – device makers and academic researchers – have to come up with more accurate devices.”

They also suggest making diagnostic and treatment decisions based on the average of multiple measurements. Canadian guidelines, for example, recommend 28 measurements during one week for home devices, and changes in medication should be based on more than a few measurements.

“The market for this equipment is rising dramatically into the billions in the next couple of years as patients age, and more doctors are using them to diagnose and manage hypertension,” said Marcel Ruzicka of the University of Ottawa who co-wrote a commentary accompanying the study.