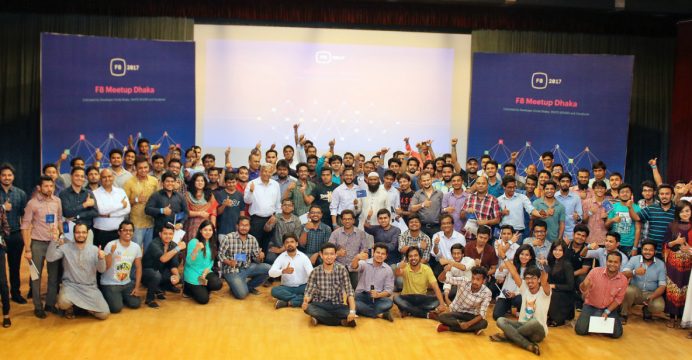 White-Board, Grameenphone’s platform for digital innovators in an association of Facebook Developer Circle Dhaka, hosted the F8 Meetup in Dhaka, Bangladesh on April 19, 2017, at GPHouse.

This event was held in relation with Facebook’s annual developer conference F8, which was held in San Jose, California, on April 18 and April 19.

The event commenced with an introduction to White-Board by Ahsan Ahmed Chowdhury, Lead Specialist at Digital Services in Grameenphone. A recorded keynote by Mark Zuckerberg, CEO of Facebook was then showcased. In the speech, Mark Zuckerberg announced some new platforms and services provided by the social networking site itself.

The speech provided insights into the areas that Facebook is working on, including augmented reality and artificial intelligence, and ventured into new areas to make next generation technology available in everyone’s pocket.

Following the keynote, Arif Nezami, the Facebook Developer Circle Dhaka’s Lead and CEO of Preneur Lab, and Tanvir Sourouv, CEO of Socian, spoke about AI & Bots. This was followed by a case study session held by Tajdin Hassan, the Head of Marketing at The Daily Star, regarding the use of bots on Messenger by the Daily Star.