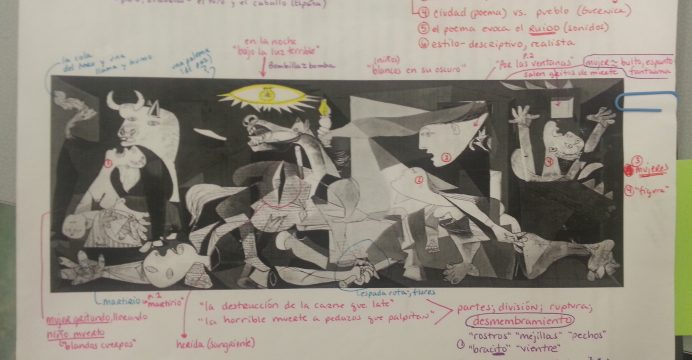 Eighty years after the bloody air raid on the Spanish town of Guernica that drove Pablo Picasso to paint a masterpiece, a new exhibition in Madrid highlights the enduring relevance of his depiction.

Adolf Hitler sent aircraft in support of Francisco Franco’s nationalist forces to strike the Basque town on the afternoon of April 26, 1937, killing as many as 1,600 and wounding hundreds, reports Reuters.

The show at the Reina Sofia museum, the painting’s home since 1992, includes newspaper photographs of the destruction which the Spanish artist saw at home in Paris, and drew on in the black-and-white oil painting.

More than 7.5 meters long and 3.5 meters high, “Guernica” was commissioned for the Spanish pavilion at Paris’s World Fair in 1937.

Rosario Peiro, Head of Collections at the Reina Sofia, said that while researching she had seen a photograph of an image of “Guernica” on display in the Syrian town of Aleppo.

“It addresses a system of destruction and terror which sadly is very much a part of our lives,” Peiro told Reuters. “It is so hard to fathom, you never really stop thinking about it.”

Versions of the image have been produced at times of conflict in places from Afghanistan to South Carolina, exhibition curator Timothy James Clark said.

DEATH FROM THE AIR

“Picasso’s painting seems to live on, indispensably, as a protest against the lie of collateral damage,” Clark said. “It speaks to the horror of death from the air … the lived reality of terror bombing.”

A debate is scheduled on April 27 in the autonomous Basque parliament over a proposal by separatist party EH Bildu to bring the work to Gernika, as the town’s name in the Basque language.

“At a time when it is essential to build a historical memory that recognizes all suffering, the power of this painting and the extent to which it condemns will be multiplied if it is in the town of Gernika on the eightieth anniversary,” EH Bildu wrote in a parliamentary motion.

The Reina Sofia and Spain’s culture minister have so far resisted such requests. A museum spokesman said the painting needed particular care after having been rolled up 88 times to be shown in more than 30 cities, and was a cornerstone of the museum’s collection.

It might not be moved again. “Just as in many other museums in the world, some works do not get lent,” the spokesman said.