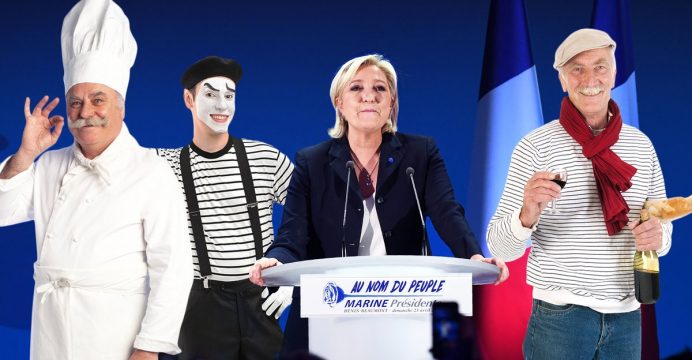 Marine Le Pen’s bid to defy the odds and win the French presidency risked a setback on Friday when the man named interim head of her National Front party stood down to defend himself against charges that he shares the views of Holocaust deniers.

Days ahead of a May 7 run-off pitting the far-right leader against centrist ex-banker Emmanuel Macron, the abrupt exit of Jean-Francois Jalkh raised ghosts of the FN’s past and revived a furore sparked by Le Pen’s father when he called the Nazi gas chambers a “detail” of history.

The renewed controversy threatens moves by Le Pen, who expelled her father, Jean-Marie Le Pen, from the party two years ago, to cleanse the FN’s image of xenophobic and anti-semitic associations and make it more palatable to a broader electorate, reports Reuters.

“With all we know of the revisionist views the Le Pen family has voiced in the past, there comes a time when the women and men of France must open their eyes to where the National Front comes from,” Macron’s campaign director Richard Ferrand said.

The presidential contest has blown apart traditional party loyalties and presented voters with a stark choice between a resurgent far right, once a pariah in French politics, and a man whose political movement is less than a year old and who has never held elected office.

It sets Macron’s enthusiasm for the European Union and call for pro-business reforms to boost growth against Le Pen’s desire for France to close its borders to immigrants, unwind EU institutions and restrict imports to protect jobs.

Most opinion polls show him winning next Sunday, with 60 percent or more of the vote, but Le Pen has in the past few days narrowed the gap, scoring public relations points with well-timed appearances and comments.

Jalkh, a long-time ally of Le Pen senior who founded the National Front, was one of 35 FN members elected to parliament in the mid-1980s. He had been due to take over as interim party chief, a post Marine Le Pen has vacated to focus on the presidential race.

“He (Jalkh) wants to defend himself and he will be filing a legal complaint… I can tell you he firmly and formally contests what he is accused of,” FN member Louis Aliot, Marine Le Pen’s partner in private life, said on BFM TV.

At issue are comments attributed to Jalkh in a conversation with a researcher in 2005 about the work of Robert Faurisson, a professor convicted more than once for questioning the scale of Jewish extermination in Nazi gas chambers during World War Two.

Jalkh was a little-known figure until his name emerged as interim party leader this week. Newspaper articles relayed the Holocaust-related comments he is purported to have made.

Also unearthed was a newspaper report from 1991 that said Jalkh had attended an anniversary rally held by supporters of Marshal Philippe Petain, French wartime leader and Nazi collaborator, in July of that year.