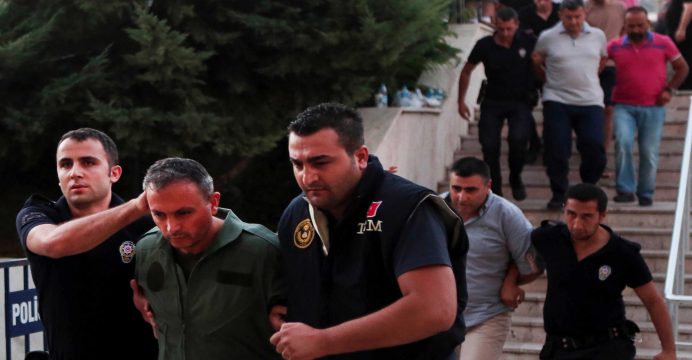 Police have arrested 1,000 people suspected of being part of a movement blamed for the failed 2016 coup.

Another 2,200 were being sought as authorities targeted what they said was a secret structure within Turkey’s police force.

Earlier this month the president won a referendum on boosting his powers.

As a result of the narrow victory Mr Erdogan can become head of the executive, beefing up the largely ceremonial role of Turkey’s president.

“1,009 covert ‘imams’ in 72 provinces have been taken into custody so far,” Interior Minister Suleyman Soylu was reported as saying, calling it an important step for Turkey.

A list of 3,224 people had been compiled by police in an operation across Turkey’s 81 provinces, reports said. In Istanbul alone, 390 suspects were being sought.

It was widely expected that the post-coup purge would accelerate once President Erdogan achieved the victory he wanted in a referendum on expanding his powers.

He feels emboldened and there’s no longer a risk of jeopardising potential referendum votes.

No matter that the opposition still contests the referendum results, their claim of widespread fraud backed by a scathing report from election observers. The president says the result is final and that’s that.

So on Wednesday the police bore the brunt of the detentions, but other institutions are likely to follow suit.

The governing AKP party was full of Gulen supporters when Mr Erdogan and the cleric were staunch allies.

It hasn’t yet been purged and could now be targeted since the president has got his referendum victory. And even if not, it will be dangled over potential opponents like a sword of Damocles: speak out and your Gulen affiliation will be exposed.

Since the coup, in which 249 people died, the government has accused the Gulenist movement of infiltrating the country’s institutions including the police, military and judiciary and of running a state within a state.

“We are trying to cleanse members of FETO (the Gulenist movement)” inside the armed forces, inside the judiciary and inside the police,” President Erdogan told Reuters shortly before the raids.

Before Wednesday, Turkey said a total of 47,000 people had been detained, including 10,700 police and 7,4000 members of the military. Thousands of people have lost their jobs across Turkey’s public institutions, including teachers and civil servants, and opposition media outlets have been closed down.

The Council of Europe’s parliamentary assembly angered Turkey on Tuesday by placing the country under review and calling for urgent measures to restore freedom of expression and the press.