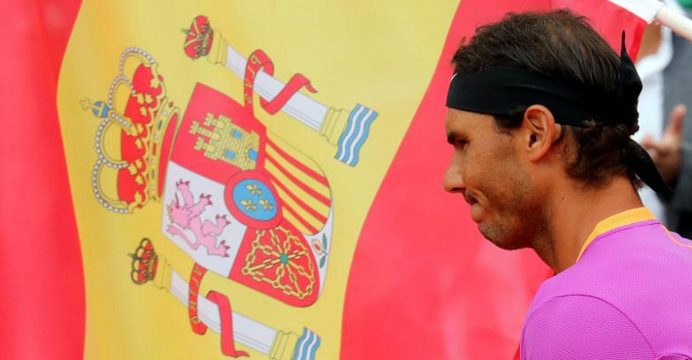 Nadal to meet Dutra Silva on his own Barcelona court

Resurgent Spanish great Rafael Nadal will have the rare privilege of playing on a court named after him when he meets Brazilian Rogerio Dutra Silva in the last 32 of the Barcelona Open on Wednesday.

Dutra Silva comfortably beat Argentina’s Renzo Olivo 6-1 6-1 on Tuesday to set up a clash with the Spanish great on the Rafael Nadal Court, the center court at the Real Club de Tenis which was renamed in his honor last week.

The 14-time grand slam champion Nadal is the main attraction at the tournament, fresh from winning the Monte Carlo Masters for a record 10th time on Sunday.

World number one Andy Murray’s late entry has also caused a stir and the Briton will meet Bernard Tomic on Wednesday in the third round after the Australian saw off German Dustin Brown in three sets.

Murray spent two years training at the Academia Sanchez-Casal in Barcelona, where he too has a court named after him. The Scot accepted a late wildcard for the tournament after being eliminated in the third round at Monte Carlo.

Tournament organizers’ hopes of Nadal meeting fellow Spaniard David Ferrer in the last 16 were ended on Tuesday when South African Kevin Anderson knocked out the popular 35-year-old in straight sets.

Austria’s Dominic Thiem beat British number two Kyle Edmund 6-1 6-4 on Tuesday to make it into the last 16 and on Thursday will meet another Briton Dan Evans, who beat Germany’s Mischa Zverev 6-4 6-4.