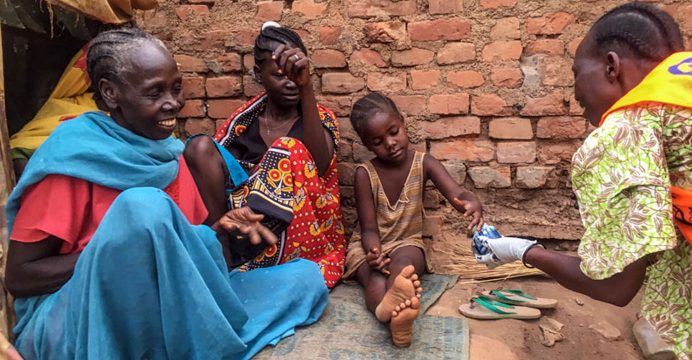 IOM, the UN Migration Agency and partners are responding to an influx of more than 22,000 displaced persons in and around Wau town, South Sudan, since the upsurge of violence on 10 April 2017. The influx is stretching existing humanitarian resources and space to shelter displaced families is running out. Needs in the area have remained high since clashes in mid-2016 displaced more than 42,000 people.

A population count on 21 April identified over 16,400 new internally displaced persons (IDPs) sheltering at the UN protection of civilians (PoC) site adjacent to the UN Mission’s South Sudan base, bringing the site’s total population to over 41,700 people. New arrivals are living in very crowded conditions in service areas, along roads and near drainage and sanitation facilities.

Asunta and her family of five, including three children and her disabled mother, are one such family who, since last week, live in a shelter covered only by a bed sheet and along a crowded access road. “It took us two hours to walk here, carrying only a few things with us as we fled from our house,” she said.

Asunta’s family had been living in the PoC site from the beginning of fighting in late June 2016 until February 2017 when they decided to return to their house in town. However, fearful of the violence that occurred on 10 April, they once again left their home to seek protection at the PoC site.

The Cathedral collective centre also saw a large influx of IDPs over the past two weeks, with as many as 5,000 to 7,000 new arrivals moving to the site. An estimated 15,000 people are currently sheltering in the site.

Amid increased levels of need, relief agencies continue to provide safe drinking water, sanitation facilities, health care and psychosocial support across the six displacement sites in Wau town. IOM’s primary health care clinics at the PoC site and Cathedral and Nazareth collective centres have seen a 46 percent increase in consultations over the past week alone.