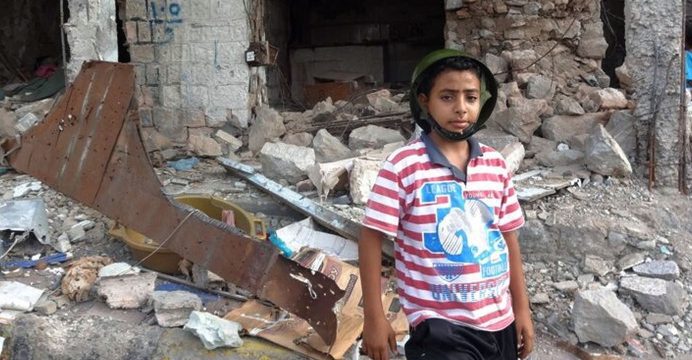 UNDP calls for increased support for resilience in Yemen

As the international community convenes for a pledging conference on Yemen tomorrow, the United Nations Development Programme urges strong support from international partners to ease the suffering of the people of Yemen.

Even before the current conflict escalated in mid-March 2015, Yemen faced enormous humanitarian challenges. More than two years of war have exacerbated these vulnerabilities, leaving nearly 19 million people in need of humanitarian or protection assistance, displacing 3.3 million people and driving the largest food security crisis in the world, with 17 million people across the country currently food insecure, including seven million who are facing starvation.

The conflict has also pushed more people into poverty, sharply reduced economic activity, and deeply diminished people’s self-reliance and livelihoods in what was already the poorest country in the Arab States region. Since fighting began, costs of food, medicine and other basics have skyrocketed, while economic activity has greatly slowed and parts of the public sector – a key employer – have ground to a halt. The situation is at once a political, humanitarian and development crisis.

The High-Level Pledging Event for the Humanitarian Response in Yemen, to be held tomorrow in Geneva and co-hosted by the United Nations, Switzerland and Sweden is an important opportunity to raise awareness and advocate for the people affected by this crisis, while mobilizing urgent resources in support of the Yemen Humanitarian Response Plan. It is also an unmissable chance to promote respect of international humanitarian and human rights law, while advocating for an urgent cessation of hostilities and a political solution for Yemen.

While not interfering with immediate, life-saving responses, the event is simultaneously an important opportunity for the international community to ensure that development engagement contributes to building resilience and reducing vulnerability in the medium and longer-terms.

Across Yemen, UNDP is working closely with humanitarian partners and forging new partnerships, mobilizing additional resources and implementing innovative programmes to help address the current crisis. With UNICEF and WHO, UNDP is working on emergency measures to pay performance-based incentives to health workers so they are able to earn income while providing much-needed treatment to malnourished patients. In partnership with the European Union, UNDP is building the resilience of rural communities through livelihood activities and provision of solar power. And in partnership with the World Bank, UNDP is scaling up to support two million impoverished Yemenis through cash-for-work programmes geared to generate income while supporting the functioning of basic services and the repair of critical infrastructure across the country.

This work addresses immediate needs while also targeting the enormous development deficits that have accumulated in Yemen over decades, stemming from structural challenges, environmental degradation, intermittent conflict, and fragile rule-of-law. Moreover, in parts of the country where active combat has ceased, development action can diminish the risks of return to conflict, or of radicalization, particularly among the country’s large population of youth.

“While our humanitarian partners do the utmost to save lives and ensure basic needs are met in Yemen, development action is essential to support communities to build resilience and improve longer-term prospects,” said Mourad Wahba, UNDP Regional Director for Arab States, “Safeguarding livelihoods and prospects for the future in Yemen is essential so that once peace is achieved, it can be sustained.”