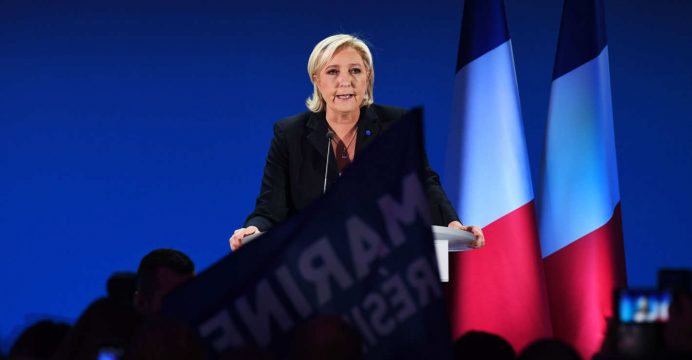 Far-right French presidential candidate Marine Le Pen has announced that she is stepping aside as leader of her National Front (FN) party.

The move comes just a day after she reached the second round of the French election, where she will face centrist Emmanuel Macron.

Ms Le Pen told French TV she needed to be above partisan considerations.

Opinion polls suggest Mr Macron is firm favourite for the second round but Ms Le Pen said: “We can win, we will win.”

The French term she used signalled that the move to step aside would be temporary.

She told France 2 that France was approaching a “decisive moment”.

Ms Le Pen said her decision had been made out of the “profound conviction” that the president must bring together all of the French people.

“So, this evening, I am no longer the president of the National Front. I am the candidate for the French presidency,” she said.

The BBC’s Hugh Schofield in Paris says this is a symbolic act intended to show her concerns are for the country as a whole and not for her party, and that she is reaching out for the voters of candidates defeated in the first round, particularly those of the Republicans’ François Fillon.

Meanwhile, also on Monday, Mr Fillon told party leaders that he “no longer had the legitimacy” to take the party into legislative elections that will follow next month’s presidential run-off.

He said he would become “an ordinary activist like any other”.