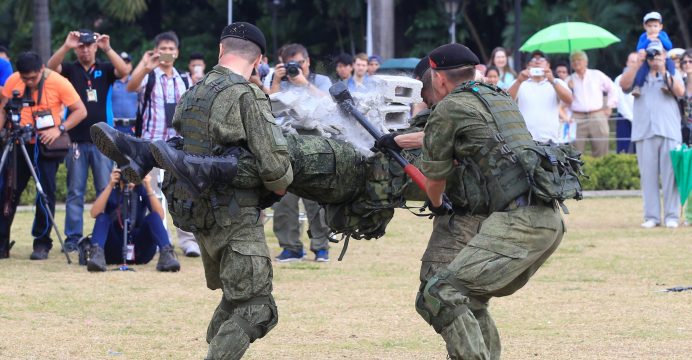 5,000 American and Philippine troops will hold humanitarian exercises next month instead of annual war games, scaling back military drills in response to President Rodrigo Duterte’s disdain for their longstanding defense alliance.

Troops taking part in “Balikatan” will simulate a response to a devastating super typhoon in the central Philippines, modeled on typhoon Haiyan in 2013, which killed at least 6,300 people and left more than 200,000 families homeless, reports Reuters.

Duterte has made no secret of his grudge against the United States and believes a U.S. military presence of any kind in the Philippines puts his country at risk of being dragged into conflict. He has threatened to abrogate treaties with Washington, but has yet to follow up.

The volatile leader has reached out to Russia and China and invited their warships to come to the Philippines for exercises too.

He has taken issue with the United States on its approach to the South China Sea and said Manila will never take part in joint patrols, to avoid provoking China.

Balikatan, which means “shoulder-to-shoulder”, has taken place on 32 occasions and every year since 2000, involving conventional warfare activities, as part of a mutual defense treaty between the two countries under a 1951 security pact.

Nearly 9,000 troops participated in a simulation of retaking an oil-and-gas platform last year, seized by an imaginary enemy, and practiced an amphibious landing on a Philippine beach near an area of the disputed South China Sea.

A Philippine army spokesman said the downsizing of the exercises was in response to Duterte’s dislike of war games with Washington.