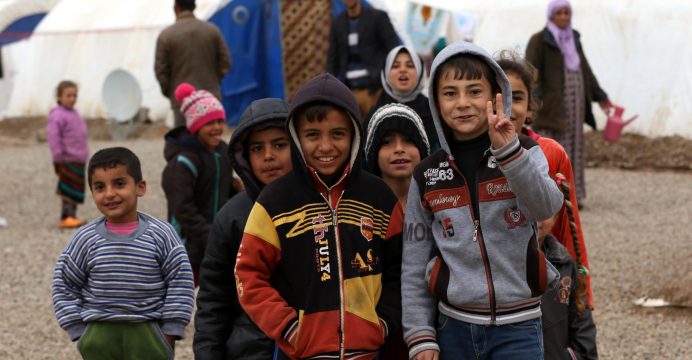 Hundreds flee Mosul fighting as others return to former IS areas

Heavy two-way traffic of carts carrying children, clothes, and the elderly crowded the main Baghdad-Mosul road on Sunday as hundreds of Iraqis fled heavy fighting or made their way back to areas seized back from Islamic State.

Families paid no heed to the sound of heavy mortar, artillery and machine gun fire raging in the background as U.S.-trained Iraqi forces battled Islamic State some two km.(about a mile) away.

Some had walked miles to a government checkpoint where the men were placed in army trucks and sent for security screening to ensure no militant sleeper cells get out of the city. Women and children were put on busses and sent to camps housing hundreds of thousands, some displaced since the offensive to retake the Islamic State stronghold began in October.

“We left because of darkness, hunger, and death. There are bullets and air strikes. We were injured, our children were injured,” said Younnes Ahmed, who was fleeing al-Thaura district with his family, their clothes all piled on a cart. There was a deep bullet wound on his hand, reports Reuters.

A group of young men further inside the city sat on the street as soldiers gave them back identification cards they had taken to conduct background checks before letting them go.

Most houses were reduced to rubble, either because of air strikes or Islamic State bombs. Cars were hollowed out.

“Islamic State blew up my house with TNT to shield against air strikes,” said Hossam Saleh who now lives in rubble because he has nowhere to escape to.

Others were walking back into the city, eager to reclaim their homes after their neighborhoods had been retaken from Islamic State by U.S.-backed security forces.

“We left because of the air strikes but have now returned. But we want the government to restore services like electricity and water and to allow us to drive instead of using carts,” said Mosaab Mohamed who was walking back into Mosul with his family.

Iraqi forces have taken much of Mosul from the militants who overran the city in June 2014. The military now controls the eastern districts and are making advances in the west.