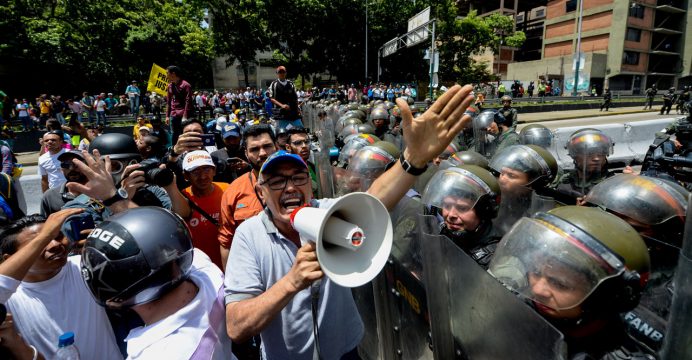 Venezuela opposition march to honor those killed in violence

Venezuela’s opposition prepared to march in silence on Saturday to honor a dozen people killed in three weeks of protests demanding that the government of President Nicolas Maduro hold delayed elections and address a growing economic crisis.

Twelve people have been killed in a renewed wave of demonstrations this month in incidents primarily involving security forces or armed civilians. Another eight were electrocuted in a looting incident that took place following a protest, reports Reuters.

Opposition leaders blame a heavy-handed crackdown by security forces, who have arrested hundreds of people and on several occasions flooded hospitals and clinics with tear gas.

Ruling Socialist Party officials say the demonstrations, in which protesters throw rocks at police and block streets with burning debris, are violent disruptions of public order meant to overthrow the government.

Saturday’s protest, however, was to be a silent one out of respect for those who died.

“(The demonstration) today shall be a thundering and historic silence that beats on the conscience of the oppressor,” wrote opposition legislator Miguel Pizarro via Twitter.

Marches are planned for cities around the country and in the capital Caracas, where the opposition will gather in 20 different places and march to the headquarters of the country’s Catholic archdiocese.

Anger over the OPEC nation’s triple-digit inflation and Soviet-style product shortages boiled over after the government-leaning Supreme Court last month briefly assumed the powers of Congress, triggering accusations that Maduro was building a dictatorship.

The court walked back the measure after international condemnation, but Maduro’s government further fueled the protests by barring the opposition’s most popular politician, Henrique Capriles, from holding office for 15 years.

The opposition says the elections council should call elections for governors that were supposed to be held last year, and accuse the council of indefinitely delaying them because the Ruling Socialist party would likely lose in many states.