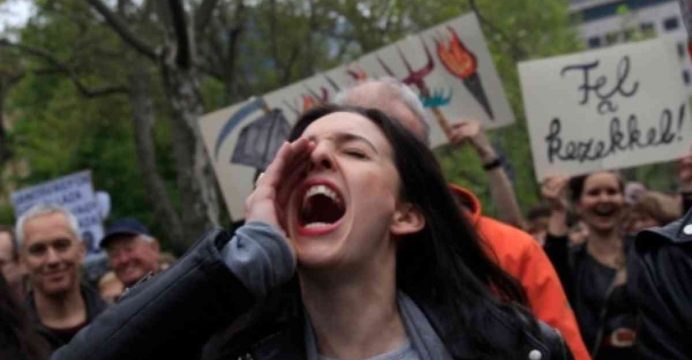 Thousands of Hungarians joined a rally mocking Prime Minister Viktor Orban on Saturday, in the latest protest against what they call his attacks on democracy and human rights.

Around 4,000-5,000 demonstrators walked with banners bearing heavily ironic slogans such as “we do not need elections”. They chanted “down with press freedom” and “we do not need Brussels”, as waves of laughter rippled through the crowd.

The march through Budapest’s center was organized by the Two-Tailed Dog Party, a spoof party which last year encouraged voters to draw penises on ballot papers in a referendum on migrant quotas, reports Reuters.

Demonstrations have been mounted in the past three weeks against a new law that targets the Central European University, founded in Budapest by the Hungarian-born billionaire financier and philanthropist George Soros.

The European Commission has threatened Hungary with legal action over the university law, which critics call an assault on academic freedom.

Orban’s opponents attack his Russia-friendly policies, and his government has drawn disapproval from some other European Union member states of its tough laws to keep out migrants.

Non-governmental organizations funded by Soros have been critical of the Hungarian premier’s migration policies, and he has accused them of interfering in politics.

His government has drafted legislation to force such organizations to publish data on their funding from abroad, a requirement critics say is modeled along similar Russian rules.

One year ahead of elections, Orban’s right-wing Fidesz party has a firm lead in opinion polls.