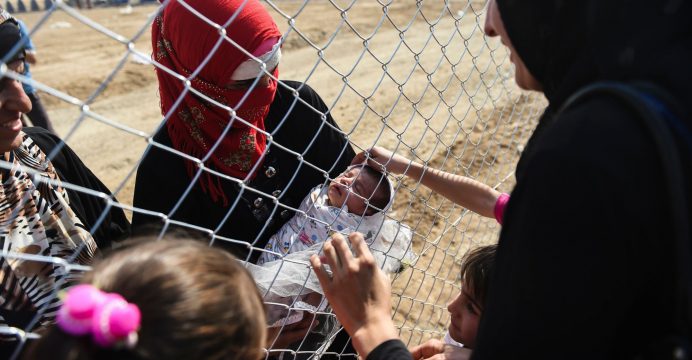 Pushing carts loaded with bags, babies and the elderly, hundreds of people fled Mosul on Saturday after Iraqi forces retook two more districts in the west of the city from Islamic State.

After walking for miles, families were taken by bus from a government checkpoint in the south of the city to camps housing more than 410,000 people displaced since the offensive to retake Mosul began in October, reports Reuters.

“We left with no water, food or electricity,” said 63-year-old Abu Qahtan, the elder of a group of 41 people from five families. “We left with the clothes on our backs.”

Iraqi forces have taken much of Mosul from the militants who overran the city in June 2014. The military now controls the eastern districts and are making advances in the west.

Islamic State fighters, holding out in the Old City, are surrounded in the northwest and are using booby traps, sniper and mortar fire to defend themselves.

On Saturday, artillery and gun fire could be heard as families arrived from Hay al-Tanak district which they said was still half controlled by the militants.

A Reuters reporter, standing within sight of the mosque, saw heavy smoke in that area after an air strike.

The U.S.-trained Counter-Terrorism Service (CTS) has retaken the nearby al-Thaura and al-Saha districts, statements said.

CTS commander Major General Maan Saadi said his troops were linking up with Iraq’s Federal Police moving in on the Old City from a different position.