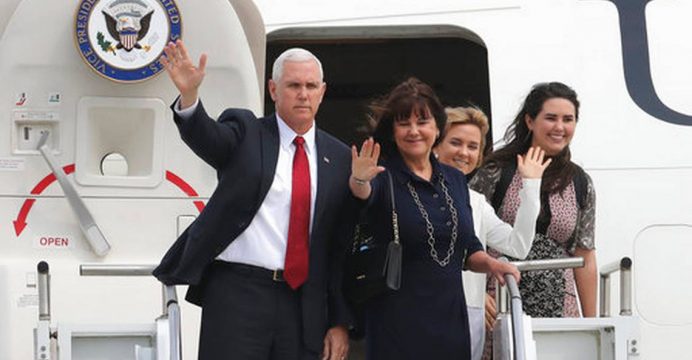 Security and koalas during Australian visit, Pence to talk trade

Pence landed in Australia late on Friday, his fourth stop on a 10-day tour of U.S. allies in the Asia-Pacific region that has included a series of roundtables with business executives in South Korea, Japan, and Indonesia.

His trip to Australia is the first by a senior official in President Donald Trump’s administration as the United States looks to strengthen economic ties and security cooperation amid disputes in the South China Sea and tension on the Korean peninsula, reports Reuters.

Pence will emphasize the long-term partnership between the two countries on defense and the economy, even as Australia eyes the merits of developing a closer relationship with China, a White House foreign policy adviser said.

“We’re the number two in the economy in this sense,” the adviser told reporters traveling with Pence. “Obviously they lead with China. They are in the region, proximity matters to them.”

An official in Turnbull’s office noted Pence has already met and spoken by phone with several ministers about the Trump administration’s commitment to the bilateral relationship.

“The prime minister will enjoy the chance to talk about opportunities for building on that partnership,” said the official, who asked not to be identified.

Australia’s relationship with the new administration in Washington got off to a rocky start when Trump lambasted Turnbull over a refugee resettlement arrangement that Trump labeled a “dumb” deal.

Details of an acrimonious phone call between the pair soon after Trump took office made headlines around the world.

It is unclear whether that deal, agreed with former President Barack Obama, will be discussed on Saturday.

Under the deal, the United States agreed to resettle up to 1,250 asylum seekers held in offshore processing camps on South Pacific islands in Papua New Guinea and Nauru.