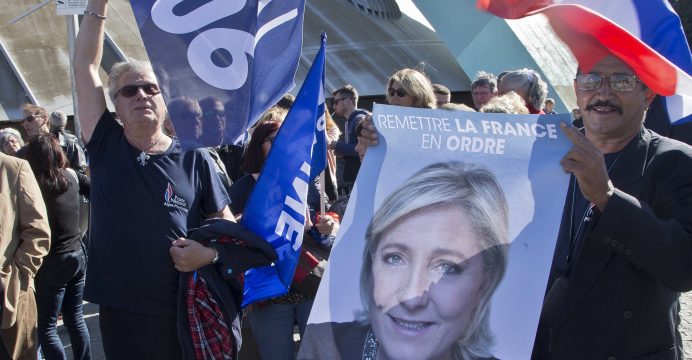 The killing of a policeman by a suspected Islamist militant pushed national security to the top of the French political agenda on Friday, two days before the presidential election, with leading candidates clashing over how to keep citizens safe.

With the first round of voting in the two-stage election to take place on Sunday, far-right leader Marine Le Pen, an anti-EU politician who wants to ditch the euro, seized on the Paris shooting to push her policies on national security.

Macron, a former economy minister in the government that Le Pen has criticized repeatedly for its security record, said the solutions were not as simple as she suggested. The centrist candidate, a political novice compared with his opponents, said there “no such thing as zero risk” and anyone who said otherwise was irresponsible.

There are four leading candidates in a race that is still too close to call. Sunday’s round of voting will be followed by a second-round runoff on May 7 between the top two candidates.

Macron is in the lead with 24 percent of the first-round vote, ahead of Le Pen who had fallen back slightly to 21.5 percent, according to an Elabe survey of voter intentions taken before the shooting.

Conservative Francois Fillon, a former prime minister, and the far left’s Jean-Luc Melenchon were snapping at their heels with 20 and 19.5 percent respectively.

The attack on Thursday night on the Champs Elysees boulevard added a new source of unpredictability to a closely contested election that will decide the management of France’s 2.2 trillion euro economy, which vies with Britain for the rank of fifth largest in the world.

The outcome could also have a bearing on France’s place in Europe and the world. Should Le Pen win, it could deal a hammer blow to the European Union, which is still reeling from Britain’s decision to leave the bloc.

All the candidates are seeking to woo the high proportion of people that are undecided about who to vote for – 31 percent according to an Ipsos poll on Friday.

Fillon also seized on the attack, which was claimed by Islamic State, saying the fight against “Islamist totalitarianism” should be the priority of the next president. “It’s us or them,” he said.

Financial markets though shrugged off the latest twist in the presidential campaign with French bond yields hitting a three-month low on Friday.

The Champs Elysees shooting is the latest in a series of attacks by Islamist militants on France in recent years in which more than 200 people have been killed. A truck ploughed into people in Nice on Bastille Day last year killing more than 80 people while coordinated attacks across Paris including the Bataclan concert hall claimed about 130 lives in November 2015. There have also been attacks on a Jewish school, a satirical weekly and a kosher market.

U.S. President Donald Trump said on Twitter that the shooting would influence the French election.